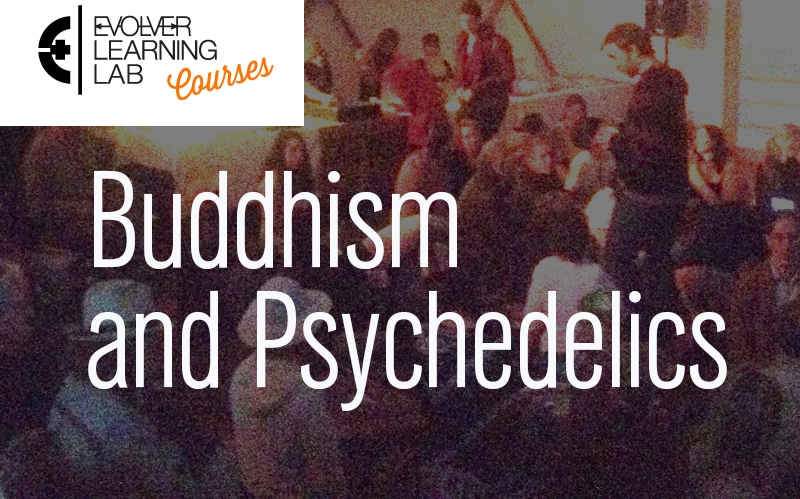 We want to offer a $15 discount on this course to our tribe—follow the link here to register: https://evolver.refersion.com/c/e0bc1/8334, and enter the code “SYNERGETIC” (all caps).

Here’s more information about the course from Evolver:

Discover how the considered use of entheogens and Buddhist practice can enhance and deepen one another, or not.

How does the issue of psychedelics, currently undergoing a renaissance, find itself juxtaposed with the ancient wisdom tradition of Buddhism? It turns out that the same cast of characters (Alan Watts, Ram Dass, Jack Kerouac, Allen Ginsberg, etc.) that introduced America to psychedelics, also brought us the first glimpse of the Buddha’s teachings. Most American born Buddhist teachers and many of their students were influenced by psychedelic substances, such as cannabis and LSD, in the 60’s and 70’s. Today, however, we find many Buddhist teachers advising against a path that they themselves once traveled. At the same time, a new generation of meditators and seekers are exploring psychedelics and benefiting from the thoughtful, informed use of mind expanding plants and chemicals. This webinar is about how best to navigate this complex, highly charged territory.

More people now than ever appreciate that Buddhism and psychedelic exploration share a common concern: the liberation of the mind.

Scientific research is demonstrating that meditation and psychedelics have related neurological effects, which can be complimentary.

The profound insights of entheogenic journeys can be deepened and integrated by Buddhist practice.

The anthropocene and its related threats to the life support systems of the Earth require us to look carefully at any tools that can safely promote radical and rapid change.

Amidst what is essentially a slow motion ecological collapse, people remain in pursuit of greater fulfillment in their lives, seeking deeper spiritual truth and leaning about strategies for liberating themselves from suffering. Bound to be encountered on any journey to wisdom are Buddhism and psychedelics.

It’s been almost 60 years since Life magazine published the article, “Seeking the Magic Mushroom,” by Gordon Wasson, which is considered to mark the very beginning of the psychedelic, or mind changing revolution. Psychedelics, considered a “phase” from the sixties, made illegal and held to be without medical usefulness, are now becoming studied as potentially valuable medicinal and therapeutic modalities.

Both in Buddhism and psychedelic experiences there is a great importance on coming to terms with one’s own mortality and impermanence, on comprehending reality directly rather than theoretically or abstractly, and on understanding the tenuous borders between self and others. We are witnessing a greater acknowledgement of psychedelic use in a spiritual context, and a flowering of books and magazine stories evidence a sharp rise in intellectual interest. All of this is tantamount to a revolution in our understanding of the mind itself, and in the ways that psychedelic interventions may result in evolutionary mental advancement.

Veneration for the induced visionary experience has roots in virtually every culture on earth, and one could argue that the use of visionary plants have been seminal to the development of civilization. Two of the most pervasive and influential cultures the planet has ever seen, that of Hellenistic Greece and Aryan India, contained at their very core inspirations derived from the ingestion of psychedelic substances.

Dr. Stanley Krippner, a leading parapsychologist points out that while psychedelic substances have been used very wisely in many primitive cultures for spiritual and healing purposes, “Our culture doesn’t have this framework. We don’t have the closeness to God, the closeness to nature, or the shamanistic outlook,” says Krippner, “We’ve lost all that.” This is perhaps where Buddhism comes in with an ethic of compassion and time-tested teachings that promotes awareness, kindness, and self-development.

It is in this context that writer Robert Thurman, the first American to be ordained a Tibetan Monk by the Dalai Lama, and who has never been a psychedelic enthusiast, told a crowd of 300 at Burning Man in 2014 that when one considers the magnitude of the challenges ahead, psychedelics that can rapidly develop our empathetic capacity and degree of gratefulness could be considered a skillful means provided they were used carefully. The fifth precept of Buddhism, Thurman added, was clearly referring to alcohol, which was seen— even in ancient times— as a huge social and health problem.

In their groundbreaking anthology, Zig Zag Zen, Allan Badiner and Alex Grey launched the first inquiry into the ethical, doctrinal, and transcendental considerations of the intersection of Buddhism and psychedelics. To mark the release of the expanded 2nd edition of the book, Allan is hosting this unique exploration of the topic, with three much admired spiritual teachers: the pioneering visionary artist Alex Grey, the Zen priest and head teacher at the Santa Cruz Zen Center, Kokyo Henkel, and the popular Zen writer Brad Warner.

Each has had a profound encounter with psychedelics that has influenced their practice, but they bring markedly different perspectives to this discussion.

For Alex Grey, entheogens continue to play an important role in his spiritual life, bringing him ever further into the mystery, and remain continuously rewarding. He regards the sacraments as building blocks to the emergence of a sacramental culture.

Kokyo Henkel has long seen the potential for psychedelics to help introduce you to the benefits of Buddhist meditation as a door opener, but he is now questioning his long held idea that the use of sacraments and plant teachers are not advisable as one advances in Dharma practice.

While he enjoys the artifacts of psychedelica, such as visionary art, or the psychedelic art of the 60’s, Brad Warner is skeptical that any chemical enhancement can be part of a dedicated Buddhist practice.

Allan will explore these perspectives in a lively, thoughtful, no holds barred one-on-one discussion with each of his guests.

You will be part of the discussion, able to ask your questions on camera, just like a Skype call. If you happen to miss a live session, you can view a video recording at any time. These sessions will be filled with provocative information, powerful personal stories, and practical advice.

In this unique, live interactive video course, you will: Joining Allan in our first session is celebrated visionary artist Alex Grey, who will discuss the role of visionary art to sharpen your vision and glimpse the subtle energies of the light body. Alex will explain why manifesting our own unique vision of the light will allow us to feel connected, whole, and healthy. Alex and Allan will recount their initiation with psychedelics and Buddhism. Back in 1976 when Alex worked in the morgue at Harvard Medical School, a friend shared with him and his partner Allyson Grey, a Buddhist book describing a practice in which monks contemplated on corpses to gain awareness of impermanence. This book, the Visuddhimagga and The Tibetan Book of the Dead, launched Alex into a lifelong study of Tibetan Buddhism which became an important focus of his spiritual life. Aside from a single brief experience with MDMA, Allan immersed himself in the study of Buddhism for many years before becoming interested in learning more about psychedelics.

Alex Grey, artist, poet, author, minister, is best loved for his paintings portraying multiple dimensions of reality, interweaving biological anatomy with psychic and spiritual energies. His books, Sacred Mirrors, The Mission of Art,Transfigurations, Art Psalms and Net of Being, trace the visions and mystical experiences that shaped his spiritual creative life and address how art can evolve the cultural body through icons of interconnectedness. Alex also served as a contributor and art editor for the New Edition of Zig Zag Zen: Buddhism and Psychedelics. Co-founded with his wife, the artist Allyson Grey, Chapel of Sacred Mirrors, CoSM is an interfaith church celebrating creativity as a spiritual path. Alex has long been a practitioner of Buddhism and an advocate for cognitive liberty. Learn more at alexgrey.com Joining Allan in the second session is Kokyo Henkel, head teacher at Santa Cruz Zen Center in Santa Cruz, California. Kokyo’s experience with psychedelics and Buddhism has co-evolved over time. Following an initial opening with psychedelics, Kokyo was drawn deeper into Buddhist practice and ultimately became ordained, and joined the order of Soto Zen Buddhism. Lately, Kokyo has felt it is contributive to the spiritual trajectories of others to acknowledge the role that psychedelics have played in his own life and practice, and is looking more deeply at his long held position that psychedelics mix with Buddhism only as an opening—and that there is no place for continued use within an advanced Buddhist practice.

Kokyo Henkel has been practicing Zen Buddhism since 1990 at San Francisco Zen Center in the lineage of Shunryu Suzuki Roshi, and at Bukkokuji Monastery in Japan. He was ordained as a priest in 1994 by Tenshin Anderson Roshi and received Dharma Transmission from him in 2010. Kokyo is currently the head teacher at Santa Cruz Zen Center. Kokyo also contributed to the New Edition of Zig Zag Zen: Buddhism and Psychedelics. Joining Allan in the third and final session is Brad Warner, Buddhist author and ordained Soto Zen teacher. Brad confesses that while he is not a fan of consuming psychedelic substances (and particularly not for the attainment of heightened spirituality) he is a great fan of all things psychedelic.  He had a “psychedelic “ band in the 80’s and admits enjoying the psychedelic art in Zig Zag Zen were very enjoyable.  On one thing Brad agrees with the Buddhists who also use plant sacraments: It is important to be having the conversation about Buddhism and Psychedelics—mainly because there is so much confusion about it. There is, Brad says, “a whole new generation promoting hallucination as a substitute for meditation.” Allan will both challenge and underline some of Brad’s ideas, preferring to take a “middle path.”

Brad Warner is author of There Is No God and He Is Always With You, Hardcore Zen, Sit Down and Shut Up, Zen Wrapped in Karma Dipped in Chocolate and Sex Sin and Zen, as well as contributing to the New Edition of Zig Zag Zen: Buddhism and Psychedelics. He is an ordained Zen teacher in the Soto lineage. He has practiced Zen for over 30 years, and once worked for the company founded by the man who created Godzilla. Allan Badiner served as the editor in the first edition, and the New Edition of Zig Zag Zen: Buddhism and Psychedelics (Synergetic Press, 2015), as well as two other books of collected essays, Dharma Gaia: A Harvest in Buddhism and Ecology (Parallax Press, 1990) and Mindfulness in the Marketplace: Compassionate Responses to Consumerism (Parallax, 2002). Allan is a contributing editor of Tricycle magazine, and serves on the board of directors of Rainforest Action Network, Threshold Foundation and Project CBD. He has been a student of Zen Master Thich Nhat Hanh for more than 25 years.

By participating in this online course, you will receive:

Be Sure to register by Monday, July 6 here: https://evolver.refersion.com/c/e0bc1/8334, and enter the code SYNERGETIC (all caps) for $15 off! And make sure to pick up your copy Zig Zag Zen: Buddhism and Psychedelics, a classic reference on this provocative topic.

Sweeping Entheogens Out From Under the Rug: Zig Zag Zen at the Rubin Museum