Sweeping Entheogens Out From Under the Rug: Zig Zag Zen at the Rubin Museum 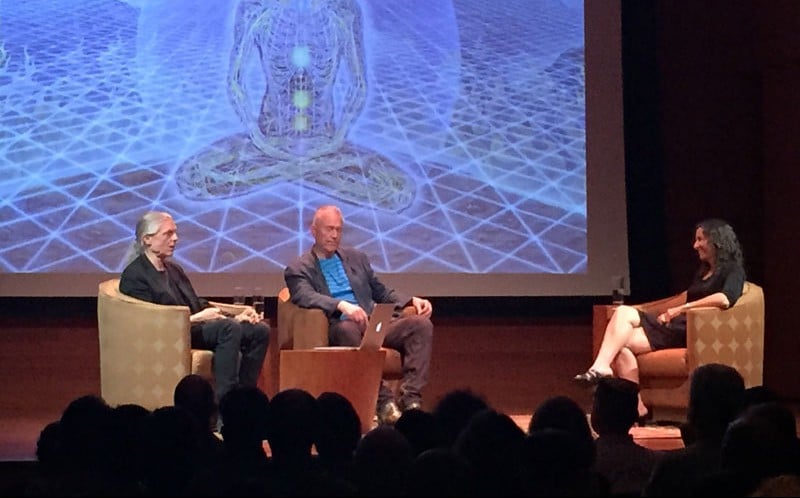 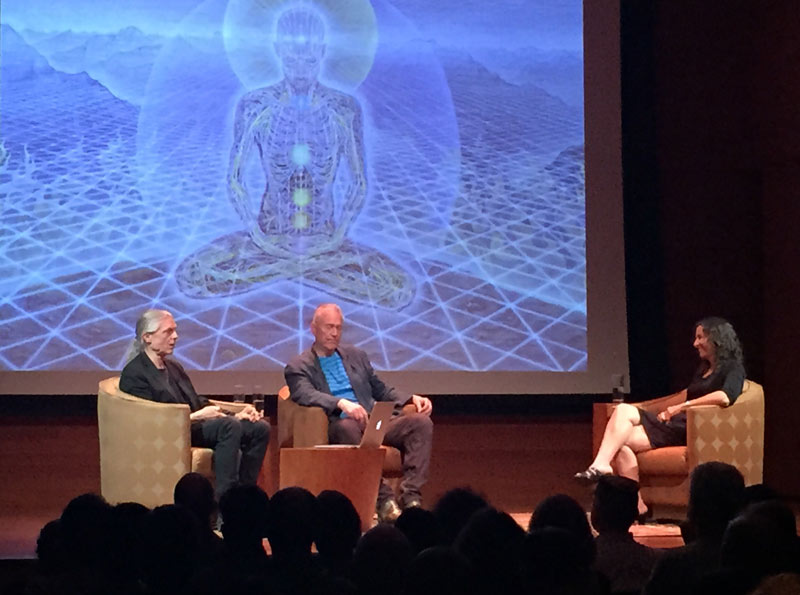 How did the leaders of the American Buddhist community find their way to spiritual practice? And why does sacred and tribal art look so, well. . . psychedelic?

These were a few of the topics discussed at the Rubin Museum’s book launch event for the new, expanded edition of Zig Zag Zen: Buddhism and Psychedelics, from Synergetic Press. In a down to earth yet provocative exchange, editors Alex Grey and Allan Badiner, along with moderator Julie Holland M.D. spoke openly about the tie-died elephant standing in the lush downstairs theater space at the Rubin Museum on June 17th.

The Rubin, located in the Chelsea neighborhood of downtown Manhattan, is a cultural hub that brings the sacred art of the Himalayas, India and neighboring regions into the heart of the West, creating an opportunity to make cross-cultural connections through immersive exhibits, films and onstage programs.

But apart from air conditioning and lack of dust, a casual stroll through the museums exhibits is, in effect, not so different from an exploration of the visionary art galleries at Fractal Planet during Burning Man or many similar festival offerings. Patterned symmetries and asymmetries unfold like snapshots of fractal etheric processes- cultural evolution, psychodynamics, animistic identifications- all meet the viewer of both ancient sacred texts, as well as contemporary visionary offerings.

The trio on stage spoke before a packed house (at least 30 people had to be turned away from the event) on topics ranging from Buddhist practice to art and healing, but always centering around the theme of breaking the taboo on openly discussing psychedelics— substances that, although repressed in our culture, have been instrumental in the evolution of all three.
Julie Holland M.D., a frequent guest expert on an array of mainstream television programs, has written books about marijuana, ecstasy and psychiatry, as well as her latest title, Moody Bitches: The Truth About the Drugs You’re Taking, the Sleep You’re Missing, the Sex You’re Not Having, and What’s Really Making You Crazy. 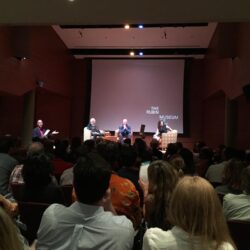 Allan Badiner, who is responsible for originating the idea of “Zig Zag Zen” as well as editing the text of the anthology, began the discussion by explaining how the majority of leading Buddhist teachers in the west all have stories of a psychedelic experience that catalyzed their spiritual transformations, a fact he learned through numerous Buddhist retreats and formed the inspiration for putting together the anthology of writings contained in Zig Zag Zen. Allan was then keen to remind the audience that, historically speaking, the best known apostles of each included the same characters: Allan Watts, Allen Ginsberg, Richard Alpert (Ram Dass) and Jack Kerouac.

Badiner continued by sharing his own experience of an earth-shattering Ayahuasca session led by Terence McKenna in Hawaii over 25 years ago that confirmed to the young seeker that his studies in Buddhism were on the right track. He recounted some of the details of this shamanic death experience during that Ayahuasca journey, which prepared him more securely for the reality of his own death. Allan had identified the archetype of a dragon that chased him through the jungle and provided a visceral encounter with his shadow. Smelling the hair on his legs burning as he ran from the fire-breathing dragon, Badiner was suddenly able to turn around and slay the dragon, only to see the face of the collapsing beast morph into his own. When he returned to the home of his shaman, Terence McKenna, he was was asked if he would do ayahuasca again in the future. Badiner laughed and asked, “Why, that which doesn’t kill you makes you stronger?” Terence, with his characteristically sharp intonation, replied, “No, actually that which kills you makes you stronger!”

Julie Holland then turned the floor over to the art editor of Zig Zag Zen, Alex Grey. Grey is perhaps best known as the father of the Visionary Art scene, a nascent but rapidly growing movement that is already dominant in underground festivals all around the world—think Burning Man—and along with his spiritual partner, wife and fellow artist Allyson Grey, runs COSM, the Chapel of Sacred Mirrors, a gallery and events center in upstate New York that is legally considered by the state to be a religious organization. In addition to hosting events and workshops at COSM, the Greys travel tirelessly along the festival circuit, participating in both intimate and massive events to lecture on sacred culture and visionary art, or simply to ‘live-paint’ with developing artists in an array of local scenes, sharing their experience and wisdom. 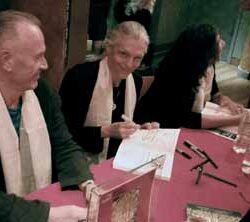 Alex began his portion of the discussion by expanding upon essential insights from “Vajravision,” his text essay contribution to the Zig Zag Zen edition, in which he states, “Vajravision helps us see beyond the opaque material world to the spiritual reality behind appearances,” and that, “A dependable way to introduce one’s self to the brightly colored and minutely articulated visionary inner worlds, to “see” with Vajravision, is through an entheogenic or psychedelic experience. Perhaps one of the primary benefits of psychedelics is their capacity to make the subtle realms explicit and inescapable to the percipient under their influence.”

Grey gave the audience a rough map of the essential realms of physicality and truth with art as a kind of medium and then initiated a visual slide-show tour of the images from Zig Zag Zen, which represent an overview of key psychedelic milestones throughout the history of art. Were cave paintings made by humans on mushrooms? Perhaps, as modern anthropologists begin accepting and exploring formerly radical points of view enunciated through poetic avatars like Terence McKenna. Grey’s exposition on the intersection of Buddhism, art and psychedelics suggests to the listener the notion that meditation, artistic practice, and psychedelics each manage to dissolve the material world of the self and build a bridge to the archetypal world of ordinarily invisible beings and formless manifestation, the products of art mapping out a trail of breadcrumbs along the way.

After more back and forth between the editors, Julie Holland’s talents as more than just a moderator were given a place to shine. Her years of experience in the psychiatric ward at Bellevue Hospital and as an earnest researcher on the topic, provide Holland—and thereby the audience—with a keen sense of the legal, practical and medical dangers of psychedelics. Holland relayed a synchronistic anecdote from Bellevue where she was able to identify a patient as ‘altered’ rather than manic due to the repeated mention of COSM. This became an fruitful touchstone for discussion amongst her colleagues, enabled her to more easily bridge the realms of the clinical and psychonautic. According to the psychiatrist, the single largest obstacle between the culture that we have today and a healthy orientation towards psychedelics, art and spiritual practice is the wholesale refusal of most people, both the anonymous as well as those in the spotlight, to discuss their views and experiences with psychedelics more openly. If this ice could melt, we might rapidly develop a creative, healthy and sensible way of living with the formerly repressed.

This led naturally into Holland questioning the editors about the use of MDMA, something only touched on between the covers of Zig Zag Zen. Is ecstasy a psychedelic, and how does it relate to the Buddhist path? While Allan pointed out that MDMA does not typically lead to hallucinations in the ordinary sense, he suggested that it appears to open a ‘heart center’ much in the way that LSD might open a cognitive one. Alex agreed, but seemed to consider the substance to be more explicitly psychedelic, retelling the narrative of his and Allyson’s first MDMA ceremony, through which the inspiration for the COSM temple and retreat center in upstate New York first entered their imaginations.

A lengthy Q & A followed and concluded with Badiner reading a striking passage from the text of a 2008 letter written by the 101 year-old Albert Hofmann, famed discoverer of LSD:

Alienation from nature and the loss of the experience of being part of the living creation is the greatest tragedy of our materialistic era. It is the causative reason for ecological devastation and climate change.

Therefore I attribute absolute highest importance to consciousness change. I regard psychedelics as catalyzers for this. They are tools which are guiding our perception toward other deeper areas of our human existence, so that we again become aware of our spiritual essence. Psychedelic experiences in a safe setting can help our consciousness open up to this sensation of connection and of being one with nature.

LSD and related substances are not drugs in the usual sense, but are part of the sacred substances, which have been used for thousand of years in ritual settings. The classic psychedelics like LSD, Psilocybin and Mescaline are characterized by the fact that they are neither toxic nor addictive. It is my great concern to separate psychedelics from the ongoing debates about drugs, and to highlight the tremendous potential inherent to these substances for self-awareness, as an adjunct in therapy, and for fundamental research into the human mind.

It is my wish that a modern Eleusis will emerge, in which seeking humans can learn to have transcendent experiences with sacred substances in a safe setting. I am convinced that these soul-opening, mind-revealing substances will find their appropriate place in our society and our culture. 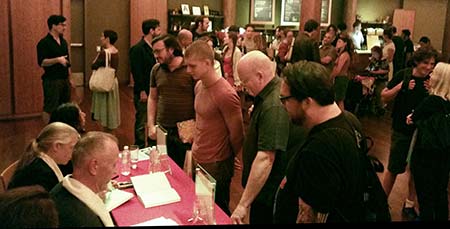 And with the reading of this passage, the audience spontaneously rose to their feet with thunderous applause, the program concluded and guests trickled out to the gift shop to buy books, get autographs, and chat with the panelists, or else simply to relax and enjoy one another’s company discussing the topics presented on stage. Zig Zag Zen: Buddhism and Psychedelics provides a thought-provoking pathway into this important discussion, which will continue for many, many years to come.

Learn more about the presenting partners for the Zig Zag Zen/Rubin Museum book launch below:

Evolver is creating a platform for content, learning, and commerce serving a global community of conscious consumers seeking optimal states of well being in mind, body, and spirit. We intend to become a leading trust-agent for individuals and groups participating in our transformative culture, one of wisdom, beauty, and fun.

The Tricycle Foundation is dedicated to making Buddhist teachings and practices broadly available. In 1991 the Foundation launched Tricycle: The Buddhist Review, the first magazine intended to present Buddhist perspectives to a Western readership. Tricycle soon became the leading independent journal of Buddhism in the West, where it continues to be the most inclusive and widely read vehicle for the dissemination of Buddhist views and values.

Anthropocene – On the Substance of a New Idea