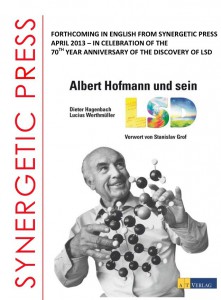 Forthcoming in English from Synergetic Press April 2013 – In Celebration of the 70th anniversary of the discovery of LSD.

“Albert Hofmann was voted greatest living genius in 2007.”
Key book on the history of LSD and the man who discovered it and the history of science, consciousness research and psychedelics.

Synergetic Press recently acquired the English language rights to the seminal book originally published in German, Albert Hofmann and his LSD: An Eventful Life and a Significant Discovery, by Dieter Hagenbach and Lucius Werthmuller. The book will be released in spring 2013, in celebration of the 70th anniversary of the discovery of LSD.

Albert Hofmann – an extraordinary person, mystic and researcher who remained open, curious and devoted to creation until the very last breath he drew at the age of 102.

Albert Hofmann is undoubtedly the best known chemist of the 20th century, and his discovery of LSD had a crucial influence on science, society and culture. In 1943 Hofmann experienced the psychedelic effect of the mysterious substance while self-experimenting on his legendary bicycle trip.

His biography takes us on a journey through the 20th century: Starting the mystical nature experiences of his childhood, all the way to his discovery of LSD and Psilocybin at Sandoz in Basel, ranging adventurous travels to the long years of his life’s eve, marked by a profound interest in the philosophy of nature and an extremely rich social life. The authors tell us all about the eventful history of LSD which after its discovery became the object of numerous clinical studies by also of quite a few dubious experiments. They trace the path of LSD becoming the fuel of the US youth and hippie movement in the sixties and paving the way for innovative forms of therapy.

Dieter Hagenbach born 1943 in Basel, studies in architecture and the arts. Founder of Sphinx Publishing House and of Gaia Media Foundation. Initiator and program executive of the international symposium on the occasion of Albert Hofmann’s 100th birthday. He met Albert Hofmann in the mid‐seventies and remained his friend until death. In 1983, he published his book »Insights ‐ Outlooks«.

Lucius Werthmüller born 1958 in Basel, consciousness researcher and parapsychologist. President of the Basel Psi Club. Founding member and board member of Gaia Media Foundation, project leader at international symposia. He met Albert Hofmann while still a child, as he was a good friend of Werthmüller’s parents, and Lucius remained close to him until the end of his life.

“The book is beautiful and very very important. It is so much more than the superb biography of Albert I was expecting; it’s the story of LSD. It pretty much covers everything of importance in the scientific, social, spiritual and artistic realms. And the illustrations! Never have seen so many researchers and participants in the psychedelic revolution been pictured in one book. It is an important work for that alone. The book is a masterpiece.” – Michael Horowitz, Publicist
“Thank you so much for the amazing gift of your Hofmann LSD historic book. The best compendium of the birth and transformative effect of one of the greatest discoveries ever made.” – Alex Grey, Visionary Artist

The Biologist publishes review of Me and the Biospheres