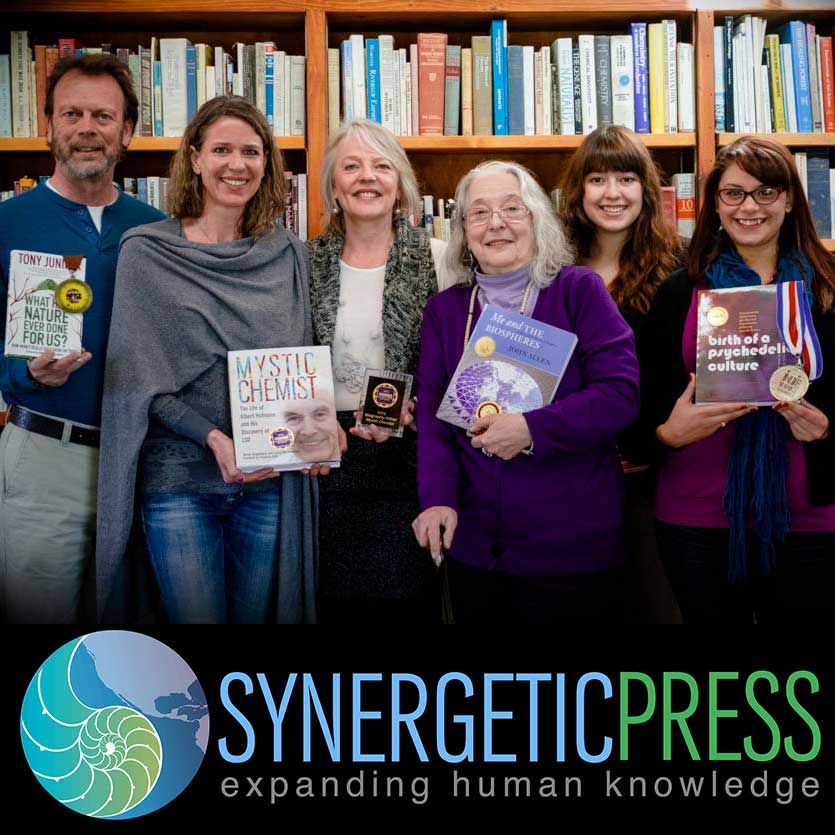 Dear friends around the planet,

Thank you for your continued support of our books and extraordinary authors. It was a banner year for the press with the release of two award winning titles and the addition of several creative people to our team. Highlights of 2013 include the launch of Mystic Chemist: The Life of Albert Hofmann on the 70th anniversary of his discovery of LSD at the Psychedelic Science conference in Oakland, California in April. See our blog to watch the authors’ keynote speech. In August we welcomed renowned British environmentalist, Tony Juniper for the American launch of his ground-breaking book, What Has Nature Ever Done for Us? Of special note was the Bioeconomics Colloquium held in July at Synergia Ranch where Tony was joined by two of our other authors, all of whom gave passionate and inspiring talks concerning the future of our planet. Videocastsof the meeting are on our website. Synergetic Press exhibited in October at the Frankfurt Book Fair where we met with forthcoming authors, translators and publishing partners. We are anticipating an exciting 2014, with the release of  mind-enhancing titles by Mark Nelson and Christian Schwägerl, among others; and the return of Tony Juniper for appearances in New York and Washington D.C. in April.

Best to all for the New Year!

Mystic Chemist: The Life of Albert Hofmann and His Discovery of LSD takes you into the life of one of the most famous chemists of the 20th century. The pages are filled with many rare, historical photographs, and works of art such as In the Land of Retinal Delight by Robert Williams above (courtesy Tony Shafrazi Gallery, NYC) some of which can be seen in the book trailer below.

What Has Nature Ever Done for Us? Wins Gold in Independent Publisher’s Living Now Book Awards.

Tony Juniper asserts that we think everything nature does for us — providing water, pollinating plant

s, generating oxygen, recycling miracles in the soil and much more — is free, but it isn’t. Its economic value can, and has been, measured. Upon realizing what that value truly is, we can stop treating our natural systems in a destructive manner.

David’s professional experience has encompassed Publishing, Media Production, Entrepreneurial Enterprise, National Campaign Politics, and Public Service. We are delighted to have him on our team.