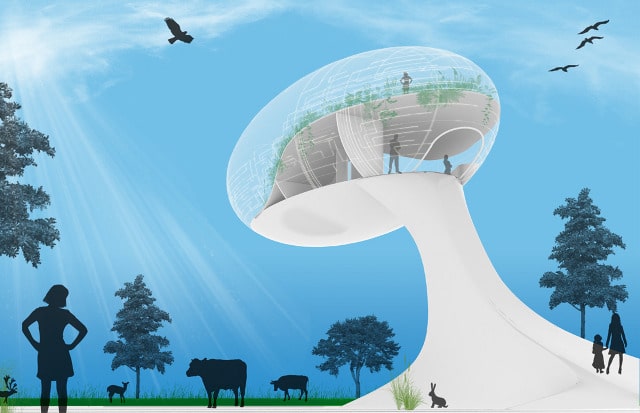 [su_youtube url=”https://www.youtube.com/watch?v=6We2J422yow” width=”620″ height=”440″]
A hot topic for layperson and PhD alike, nobody will deny that the term Anthropocene is trending. One the one side, there are those who believe that the idea that humans are in fact the driving force behind a new geological epoch is a benefic and life-affirming path forward; while on the other, those who see only the continuation of a  ‘should be discarded’ notion of anthropocentrism inherited from Christian doctrine (the latter tend see the use of the term ‘anthropocene’ as a clever political/environmental tool at best). Christian Schwägerl- a biologist, correspondent for Der Spiegel, and Synergetic Press author- stands firmly on the pro-anthropocene side of the debate. And in this video, he briefly summarizes the case for adopting the term scientifically as well as embracing a new ‘bio-futurism’ that can embolden a prosperous future.

After explaining how humans have altered 75% of Earth’s land surface, created dead spots in the oceans from the over use of nitrogen fertilizers, warmed the atmosphere through industrial emissions, and now appropriate 90% of mammalian biomass (as opposed to the 1% during the Neolithic revolution), Schwagerl suggests that the long-term thinking that would result from adopting the anthropocene idea as a geological epoch gives us the power to shape our future consciously and for the better. We can never go ‘back to the Holocene,’ a tempting nostalgia prophesied by the European Romantics during the onset of Industrialization, but we can take the reigns by becoming conscious stewards of the biosphere and allowing the anthropocene idea to imbue our everyday decisions with responsibility for our significant ecological role as humans. As Schwägerl explains, “Our lifestyles, our daily consumerism, decisions, what we do or don’t do… shapes the future.”

Schwägerl then explores the notion of ‘bio-futurism,’ a life-affirming way of looking ahead that could allow our civilization to grow with the richness of nature, rather than at its cost. He explains that instead of seeing the activity of cells as being like ‘a factory,’ he suggests that factories and machines are really more like very primitive cells. Once we can grapple with this fundamental paradigm-shift, we can act less like barbarians and more like ‘planetary gardeners’ that prepare a fruitful soil for future open developments.

This is a notion that Schwägerl develops more deeply in Chapter 8 of the Synergetic Press title, “The Anthropocene: The Human Era and How it Shapes Our Planet.” He explains:

“If products were built so that they could be turned back into raw materials for the next generation they would be easier to repair and upgrade than they are today. These products could be made from plant-based materials optimized by biotechnology. Or they could be synthetic and feature organic characteristics created through biomimicry. Innovative recycling plants could be fed with entire scrap heaps from the past to be processed into new raw materials through urban mining. Plastic recycling would become a source of raw material, making it superfluous to drill new oil platforms in the deep sea or in the Arctic. New chemical substances would absorb toxic substances and render them harmless. The bioadaptive imagination of scientists is only just gathering momentum:

The transformation could go even deeper: genetic algorithms in the future could enable much more complex calculation processes than digital ones; biological nanomaterials could significantly reduce the necessity to use metal and finally, DNA—the very stuff of which life is made—could prove to be superior in information storage, making DNA computers a reality.”

Schwägerl’s inspired vision is only the tip of the iceberg of what’s possible, a persuasive means of getting the reader or listener to see the world differently. For the German biologist, journalist and author, the anthropocene idea is the very spark needed to set off this new wave of bio-futurism and abolish the outmoded notion of humans as ‘invaders’ to nature, thereby returning us to our ecological (from the Greek oikos- meaning ‘house’) place at home on Earth.

Here’s a link to the book.

A Brief History of How We Got Into This Mess