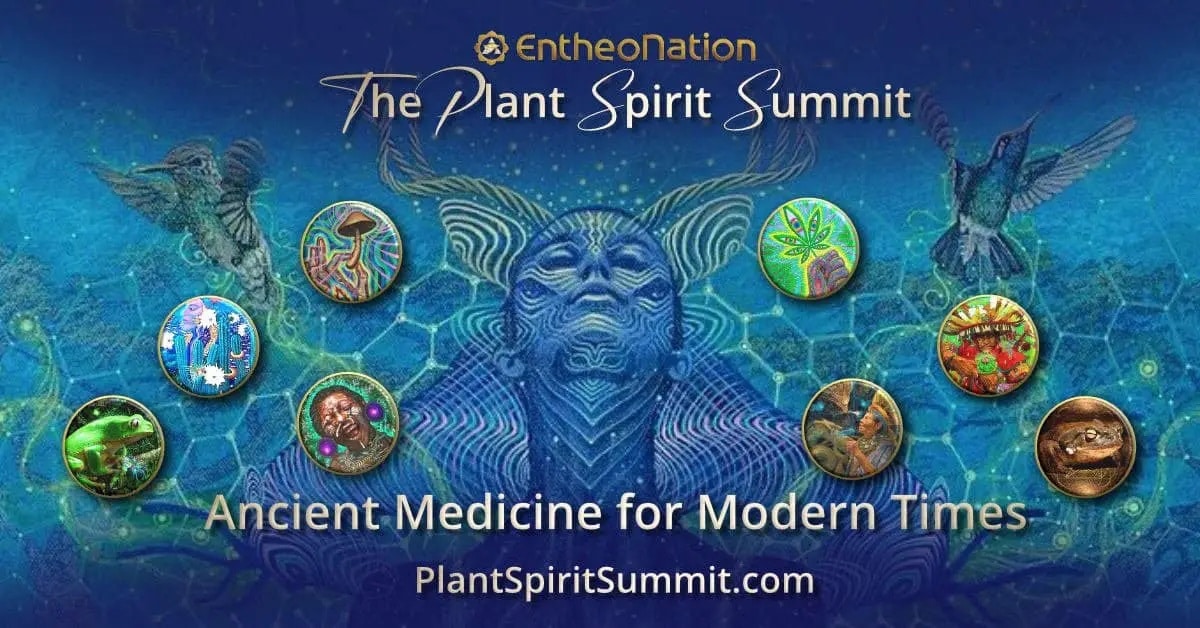 A new paradigm of healing is emerging at the intersection of psychedelic medicine and ancestral shamanic healing... Psychedelic medicine has been pushed to the forefront as the new frontier in psychotherapy, a new solution to the global mental health crisis.

Psychotherapists might say that its cause is widespread trauma, the outcome of an increasingly unequal capitalistic culture, exacerbated by financial uncertainty, and social isolation caused by the pandemic.

Shamans might say that the root lies in our separation from Nature and Spirit, and that the events of 2020 signalled a shamanic initiation of planetary proportions - a warning sign of a civilization recklessly out of balance and an urgent call for humanity to wake up.

What if both are right?

Learn more at the Plant Spirit Summit on Feb 22-26, 2021, a free-for-all 5-day online event hosted by Lorna Liana of EntheoNation.

This transformational Summit seeks to explore the intersection of psychedelics & shamanism by facilitating bold, inquisitive conversations about the expansion of plant medicine shamanism and the future of psychedelic medicine. During the Summit, 40+ indigenous and Western speakers will share their priceless perspectives and concrete advice on how to navigate the Psychedelic Renaissance and Global Shamanic Revival, safely, responsibly, and with integrity.

During this visionary 5-day Summit, you’ll hear from:

Deep in the heart of the Brazilian Amazon, Lorna Liana discovered her purpose and her divine calling while drinking visionary plant medicines with indigenous shamans. She was given a mission: “To leverage emerging technologies to preserve indigenous traditions, so that ancient wisdom can benefit the modern world, and technology can empower indigenous people.”

In pursuit of this mission, Lorna became an online business coach and new media strategist to sustainable brands, social ventures and visionary entrepreneurs, helping them attract their tribe and ignite a movement around their mission-driven businesses. Through podcasting, video blogging, and social media, she shares the stories of both indigenous people and the world’s foremost experts in psychedelic science, modern shamanism, and consciousness research to inspire each and every one of us to explore the depths of our minds, spirits, planet…and evolve.

Over the past years, Lorna has built EntheoNation as a digital nomad, living in Thailand, Bali, Mexico, Brazil, Costa Rica, Hawaii, and Spain.

EntheoNation is a leading psychedelic media publisher that publishes content about:

Ayahuasca - the visionary brew ceremonially drunk in indigenous communities in the Amazon since ancient times, and which has over the last decade begun its expansion throughout the Global North, prompting the emergence of neoshamanic circles and psychedelic integration specialists. Ayahuasca ceremonies and retreats, which are now available globally, have become increasingly popular among psychonauts from all walks of life, and just about anyone in need of healing deep-seated trauma, attaining profound spiritual growth and personal transformation, and finding direction in life.

Magic Mushrooms - the fantastically psychedelic fungi growing throughout the world, and consumed by early humans since at least 10,000 BCE; as one of the most available naturally occurring psychoactive fruits, they have been an integral part of the psychedelic movement for decades. Now, with mounting evidence of psilocybin’s effectiveness against mental disorders such as depression and anxiety, magic mushrooms are spearheading the wave of psychedelic medicalization, decriminalization, and legalization.

Sacred Reciprocity -  the expansion of ancestral plant medicines beyond their native geographic regions has swelled the number of Western plant medicine ceremony participants and facilitators… to the point where more non-indigenous people consume and facilitate ayahuasca than indigenous. What are the ramifications of this dynamic? How might we decolonize plant medicines and co-create a psychedelic community that is diverse and inclusive? What actions can we take to show solidarity for the indigenous movement? Explore these topics in the free Sacred Reciprocity School.

Join the conversation at the FREE Plant Spirit Summit on Feb 22-26, 2021, and discover how you can participate - safely, responsibly, and with integrity.

A Year of Transformation