by Dieter Hagenbach and Lucius Werthmüller 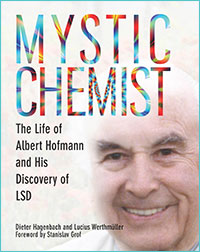 • A history of science, consciousness research and psychedelic studies

Albert Hofmann and His Discovery of LSD – Only a few discoveries of the 20th century have had such a crucial and meaningful influence on science, society and culture as LSD; this mysterious and extremely potent substance which causes profound changes of consciousness in doses of just a few hundred micrograms. Swiss chemist Albert Hofmann first experienced its remarkable effects during a self-experiment with Lysergic Acid Diethylamide in 1943 at Sandoz Laboratory in Basel. It changed his life deeply, as it also has the lives of millions of people all around the world. His bicycle ride during this first LSD trip became legendary.

Authors Hagenbach and Werthmüller, close friends of Hofmann, take us on a journey through the 20th century from his mystical childhood experiences with nature; to his chemistry studies with Nobel Prize winner Paul Karrer in Zurich through his discoveries of both LSD and psilocybin at Sandoz; to his adventurous expeditions; to his many years of retirement devoted to philosophy of nature and a rich social life. The authors reveal the eventful history of LSD, which became the subject of numerous clinical studies opening the way for innovative forms of therapy. It fueled the youth movement of the sixties, influenced developments in computer technology and science and helped spawn a new science of consciousness. Albert Hofmann was voted “greatest living genius” in 2007 by the British newspaper, The Telegraph. He lived an active life to the age of 102.

Future generations will see Albert Hofmann as one the most important figures of the twentieth century; a Promethean visionary who helped chart a new trajectory for the evolution of the human species.  -Stanislav Grof, Psychiatrist

Taking LSD was a profound experience, one of the most important things in my life. -Steve Jobs

Albert gave us LSD and now Dieter and Lucius give us Albert in their profoundly important and timely biography, Mystic Chemist, The Life of Albert Hofmann and His Discovery of LSD. Dieter and Lucius tell an inspiring story of how Albert integrated psychedelic mystical experiences into his life, family and culture, suggesting that perhaps we can do so as well and avoid another backlash. As psychedelic research is dramatically expanding, Albert’s life journey deserves to become more widely known. There is much to learn from this book and from Albert’s example. -Rick Doblin, MAPS Founder and Executive Director

Albert Hofmann’s discovery of LSD, the most potent mind-expanding substance ever found, was an event of multiple synchronicities – it occurred in 1943 in Switzerland, a neutral country, within months of the building of the atomic bomb – as if it was to be a kind of psychospiritual healing antidote to the mass death weapons. It occurred in a country with a centuries-long tradition of alchemy, the psychospiritual counterpoint to reductionist material science – and involved a previously unknown substance that could induce integrative expansions of awareness with profound implications for healing, for creative problem-solving, and for cosmological understanding. Albert Hofmann had the scientific and the spiritual insight to recognize the enormous significance of his discovery and spent the rest of his long life exploring it with an ever-widening international circle of fellow scientists, artists and visionary explorers. The authors of this biography have done a marvelous job of pulling together documentation and commentary, not only about Hofmann and LSD but also the socio-cultural and political upheavals of the 1960s, during which LSD and all mind-expanding drugs played an enormous role – and were made illegal. The story of LSD and its potential role in society is however far from over, as Hofmann himself also thought. Please read this book and stay tuned… -Ralph Metzner, PhD

The best compendium of the birth and transformative effect of one of the greatest discoveries ever made.” -Alex Grey, Visionary Artist

Mystic Chemist is a fitting tribute to one of the greatest innovators of the 20th century. In addition to its meticulous coverage of Albert Hofmann’s 100 years on this planet, the authors have given their readers a marvelous panoply of LSD’s impact on art, biochemistry, psychotherapy, and spirituality, Indeed, it is a book of wonders. -Stanley Krippner, Ph.D. Professor of Psychology, Saybrook University

What a gift to humanity, history, and seekers of truth! Tears welled up spontaneously as I read so simply and factually the horrors of the perverted destruction of such marvelous scenes and such harassment and torture of so many wonderful, idealistic people. Having participated in some of those events the authors evoked so tenderly, I found their account brilliantly restrained, which makes those glories and horrors even more eloquent to the discerning.

Deepest congratulations on transmitting an extraordinarily complete account of one of the greatest men I ever knew and whose presence was a direct manifestation of brilliant function, profound being, and illuminated understanding.” -John Allen, FLS, Chairman, Global Ecotechnics Corporation Inventor, Biosphere 2

This book is more than a superb biography of Albert Hofmann, it’s the story of LSD and pretty much covers everything of importance in the scientific, social, spiritual and artistic realms that resulted from his epochal discovery. -Michael Horowitz, psychoactive drug historian, editor of works by Aldous Huxley and Timothy Leary