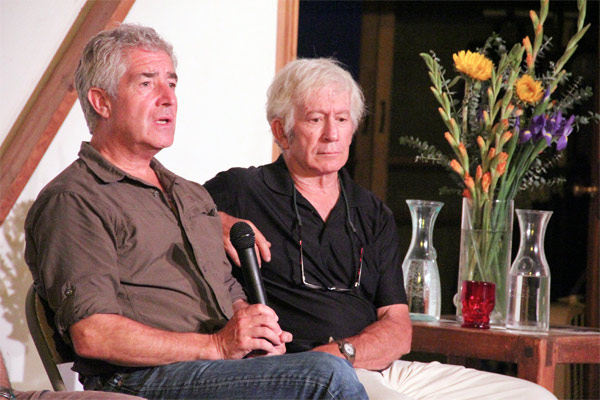 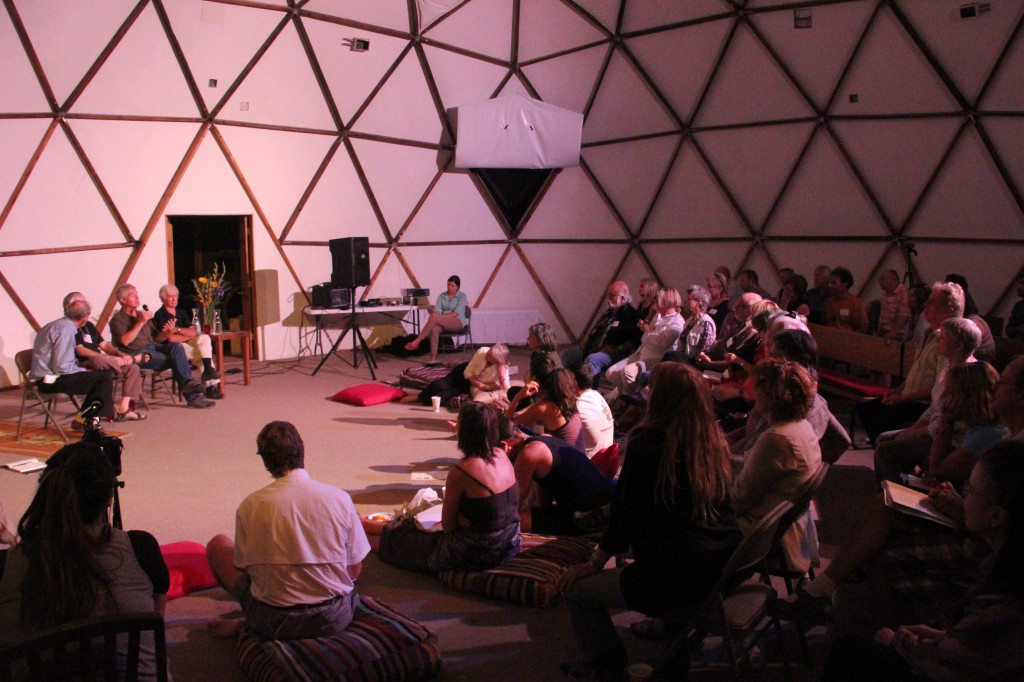 Synergia Ranch is still warm with the glow of fellowship following the Frontiers of the Future colloquium last Tuesday night where over 70 guests filled the 40+ year-old geodesic dome. Some were old friends and colleagues, while others had simply read about this discussion of the ‘New Bioeconomics’ in the Santa Fe paper earlier that morning. 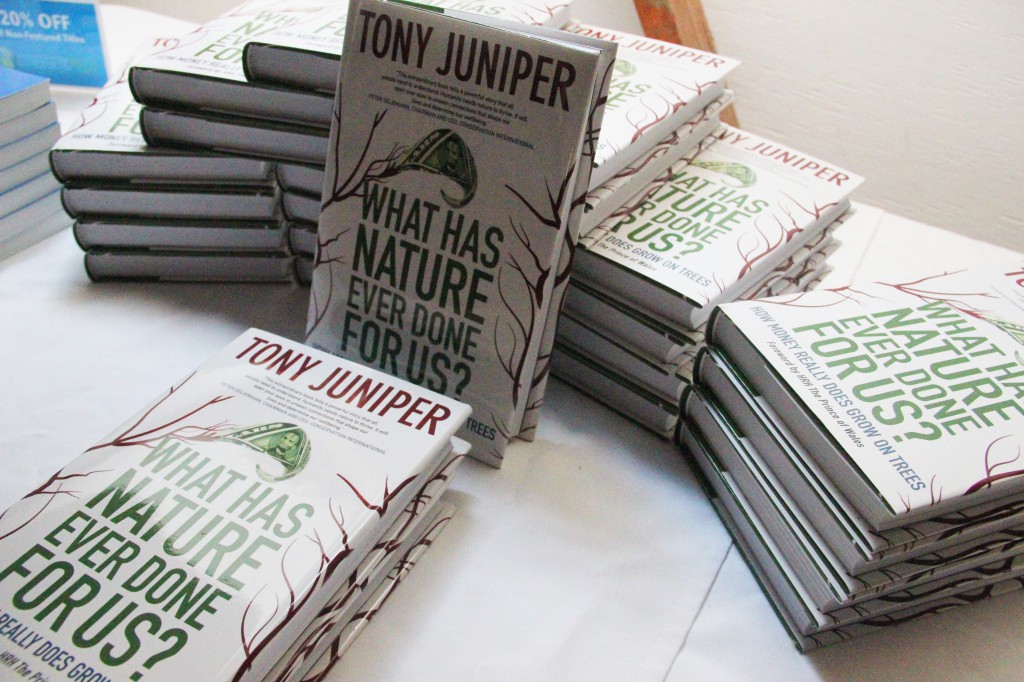 Prompted by the presence of British author and adviser to HRH The Prince of Wales Tony Juniper, who is here in New Mexico to support the release of Synergetic Press’s newest title What Has Nature Ever Done For Us? and kick-off his West coast tour of book signings and speaking engagements, the bill of speakers at the colloquium was a real “who’s who” of ecological, economic and biospheric thinking and experience. 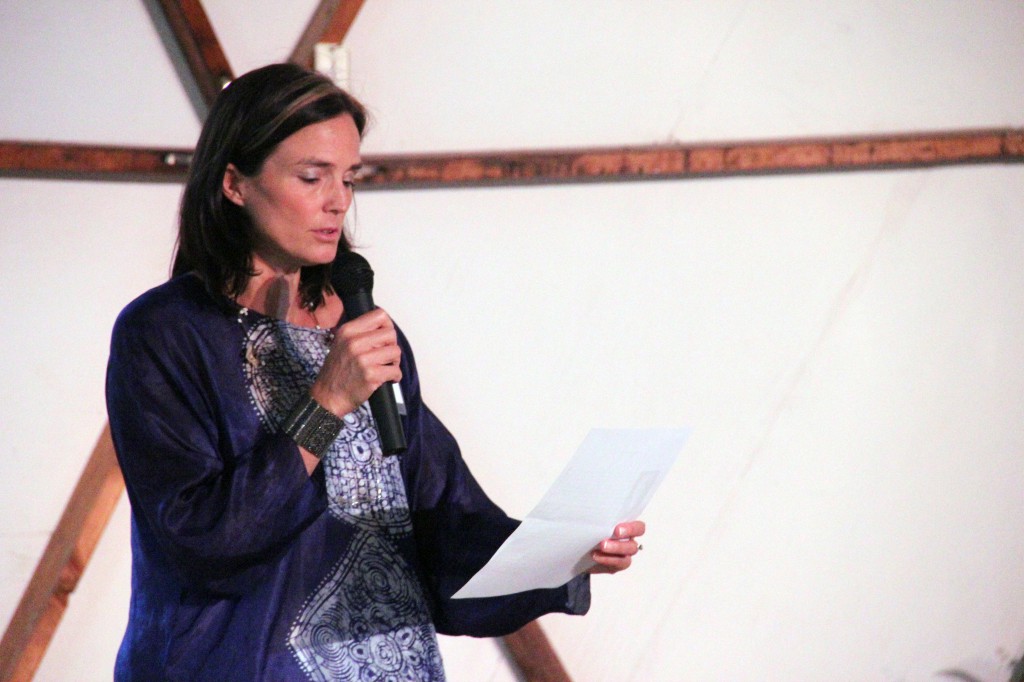 Once the rows of benches and folding-chairs became filled, and the overflow of guests strewn about the large pillows that formed an intimate circle around the stage-space within the dome,  the elegant host Gay Dillingham, cofounder and principal director at Earth International, introduced the first speaker. 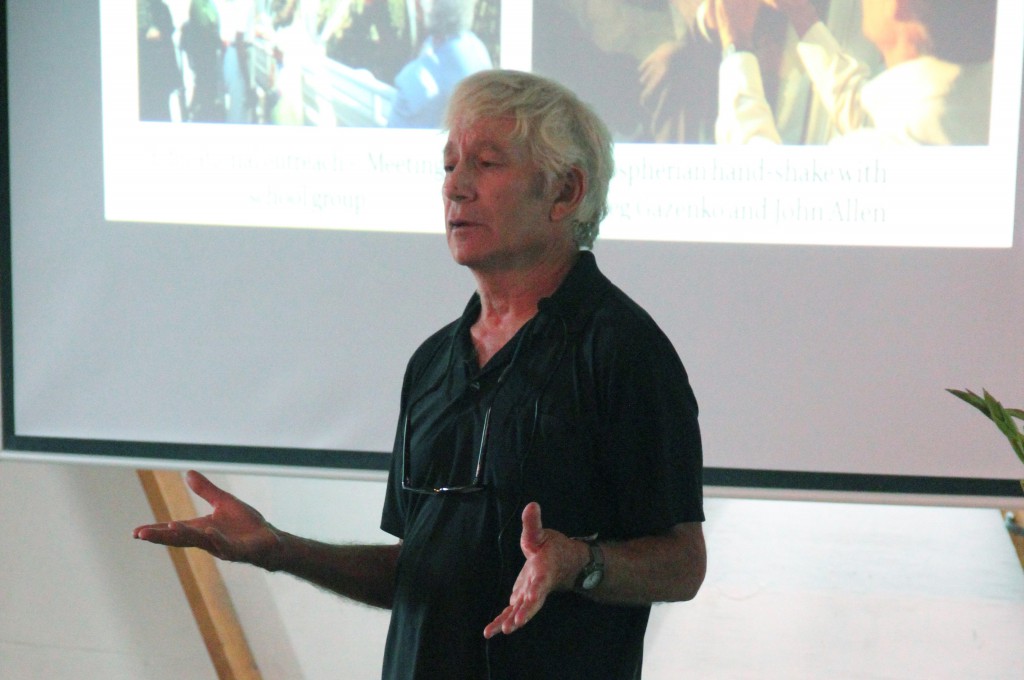 Mark Nelson holds a PhD in Philosophy, chairs the board of Ecotechnics, runs Wastewater Gardens International, lived in Biosphere II during the two-year closed ecological systems experiment, and manages the farm at Synergia Ranch, mentoring the array of young volunteer farmers that come traveling through on a weekly basis. Mark’s ability to communicate and teach, as well as his humor, shined through as his talk ‘Living Under Glass’ brought the audience through a round of Synergetic initiatives spanning decades and climaxing  through the grandiose Biosphere II experiment, an experience which then lead to Mark’s work with Wastewater Gardens International.

It became clear that with all the accelerated life-rhythms and instantaneous feedback of a closed ecological system, living in Biosphere II, like seeing the Earth from space, was for Nelson an ecological gnosis of sorts, through which human-kind’s immersion within a web of life was an inescapable certainty, leading to its own ethical imperative. Mark explained, “One of the big things in Biosphere II was… in a small world, there really weren’t any small actions. Everything has an impact.” 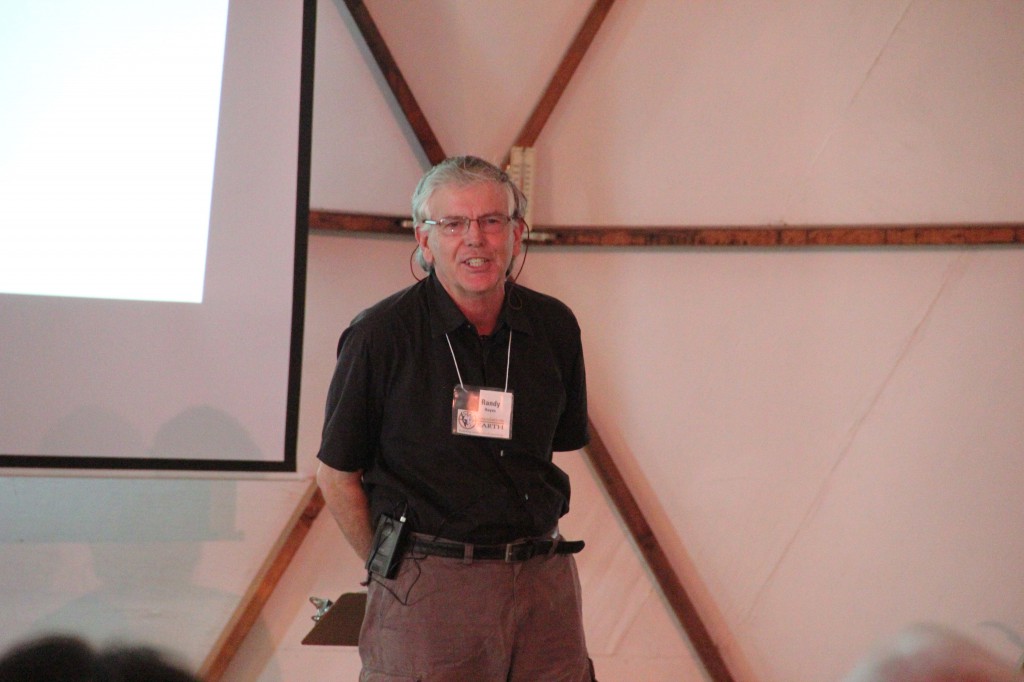 The next speaker Randy Hayes flew in from Washington D.C., where he works at Foundation Earth. Hayes, who also founded the Rainforest Action Network and who has been described by the Wall Street Journal as an “environmental pit-bull,” brought a lifetime of experience on the front lines of that tumultuous chasm between ecology and capitalism.  His talk, centering around “The Great U-Turn From Cheater Economics to True-Cost Economics” revealed a long-term vision of change, through which ‘ecologizing capitalism’ is merely a short-term intermediary step.

Randy showed us how the myopic corporate view of cost-benefit analysis externalizes so many of the actual costs of industry that are often invisibly passed on to some other individual or entity, and revealed how we need a new way of accounting for this convenient and absurd discrepancy.

Following Randy, host and moderator Gay Dillingham gave a deeply personal introduction to the playwright, inventor, and polymath genius behind the Biosphere II experiment himself, John P. Allen. Attention on Allen immediately filled the room with the aura of a living legend as he explained the ‘Harmony of the Spheres,’ a reading that was simultaneously the most technical and yet heartfelt performance of the night. Allen’s incomparable experience and pivotal role in developing the science of biospherics gives him a unique basis for illuminating the esoteric subtleties in truly understanding the relation between the biosphere, ethnosphere, noosphere and technosphere. The controversial Biosphere II experiment demonstrated that humans culture and technics can thrive within a healthy biosphere should we act with appropriate values in the world. The 83-year-old Allen summed up: “I don’t give up hope in the future; wish I could have more faith in the present, more charity toward the past. I happily see here, embodied in different ratios by each of us, allegiance to those values, which we need to challenge this disastrous era.” Read Harmony of the Spheres here. 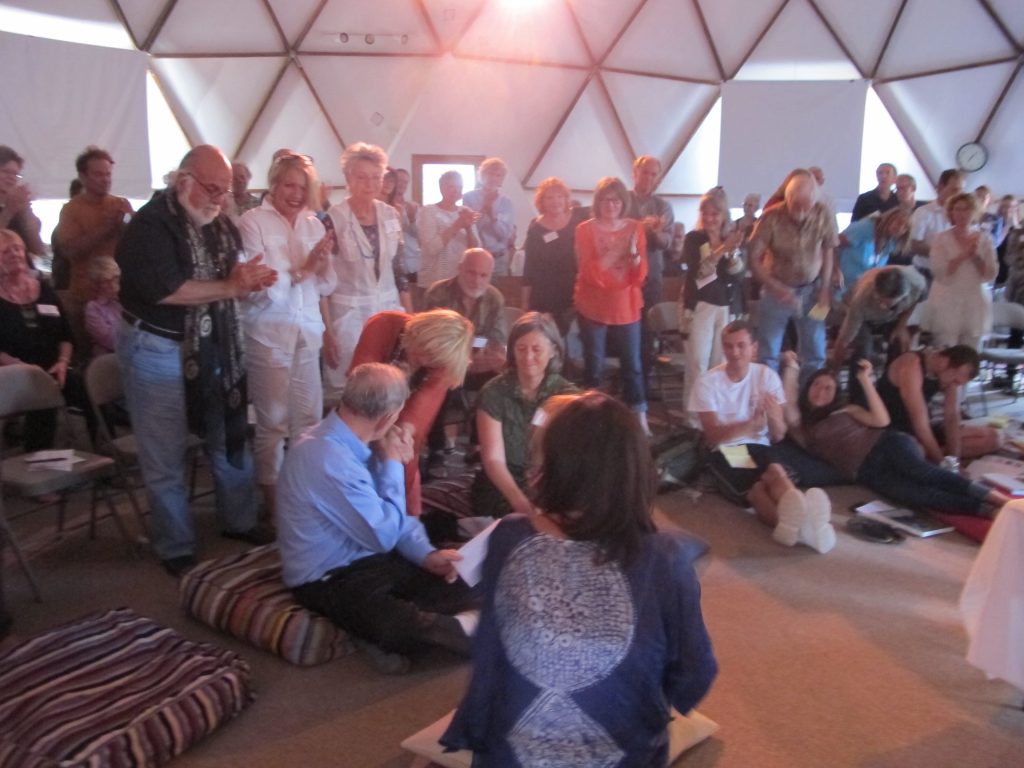 And with this, the entire room swelled with a standing ovation before the audience dissipated into the ranch kitchen for refreshments, hors d’ouevers and stimulating ecological conversations. 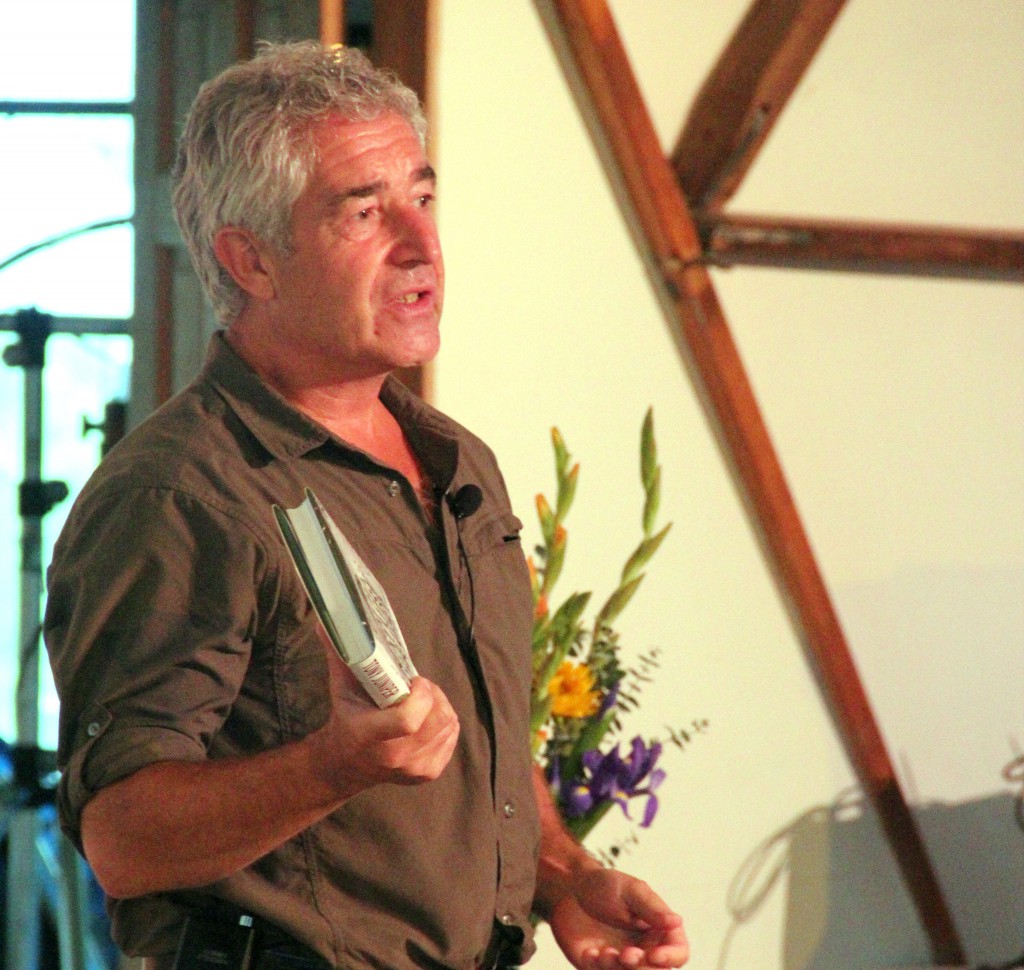 Finally, special guest Tony Juniper, a former Green Party candidate in England, exec at Friends of the Earth, and Ecological Adviser to HRH The Prince of Wales, had each audience member focused whole-heartedly upon the concrete examples drawn from his new book and demonstrating exactly what Nature does for us. Tony provided rich detail of how disappearing vultures led to a deadly and expensive outbreak of rabies, how the loss of bees has led, in one culture, to the necessity of hand pollination that diverts human labor resources, and how, in the absence of a particular species of frog, a potential wonder-drug for stomach ailments was lost to evolutionary history.
[su_youtube url=”https://www.youtube.com/watch?v=dYxAddIkQbQ” width=”560″ height=”360″]
But the examples only illustrated the point that we can learn to see what is in Nature now, and how to value those ‘services’ appropriately. Juniper cleverly develops a language that speaks to the bottom-line of big capitalism and inspired us all to realize, in a constructive manner, that intersection between economics and ecology that is so crucial to understanding and transforming unhealthy entrepreneurial and organizational practices. 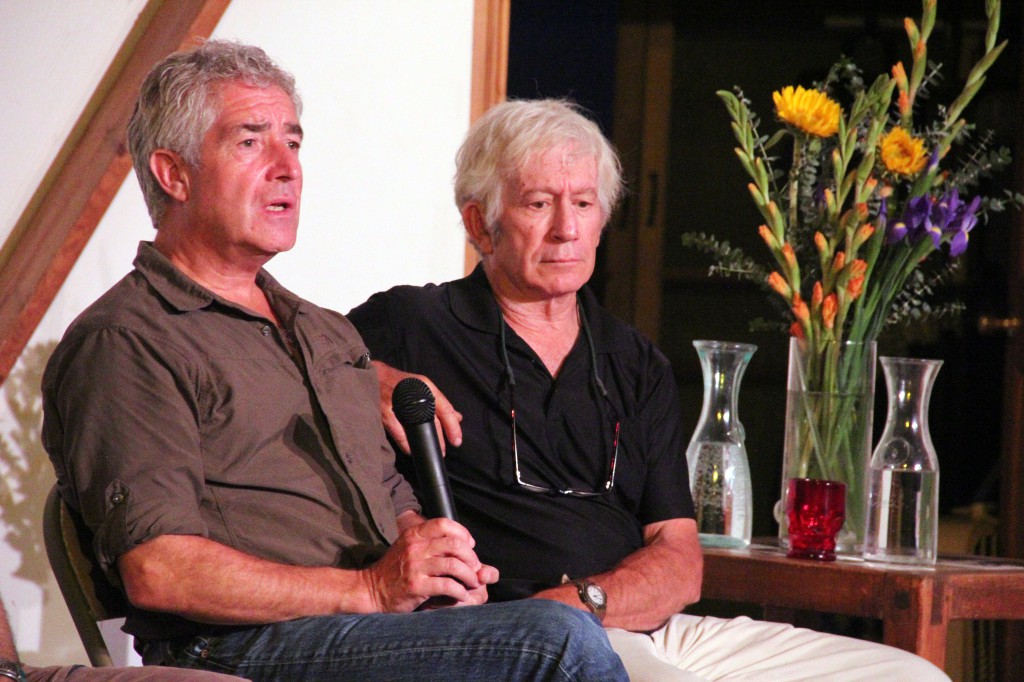 Following this, the colloquium arrived at its full-form with an interactive, audience-led discussion with each speaker sitting side by side as a panel. Questions centered around how to utilize the paradigm shift described through the talks in a practical manner. Randy Hayes shared stories of going head to head in corporate board rooms, Mark Nelson gave more insight from living in Biosphere II, John Allen displayed wise and sometimes counter-intuitive warnings and images, and Tony Juniper drew even more illustrative examples from his research and lifetime work with dedicated ecological thinkers and do-ers. In the end, the colloquium became truly synergistic as new and deep alliances between the speakers, and audience members, emerged that could not have been predicted by summing the parts. The conversation has begun in the emerging discipline of bioeconomics — establishing a means to truly value what Nature does for us. 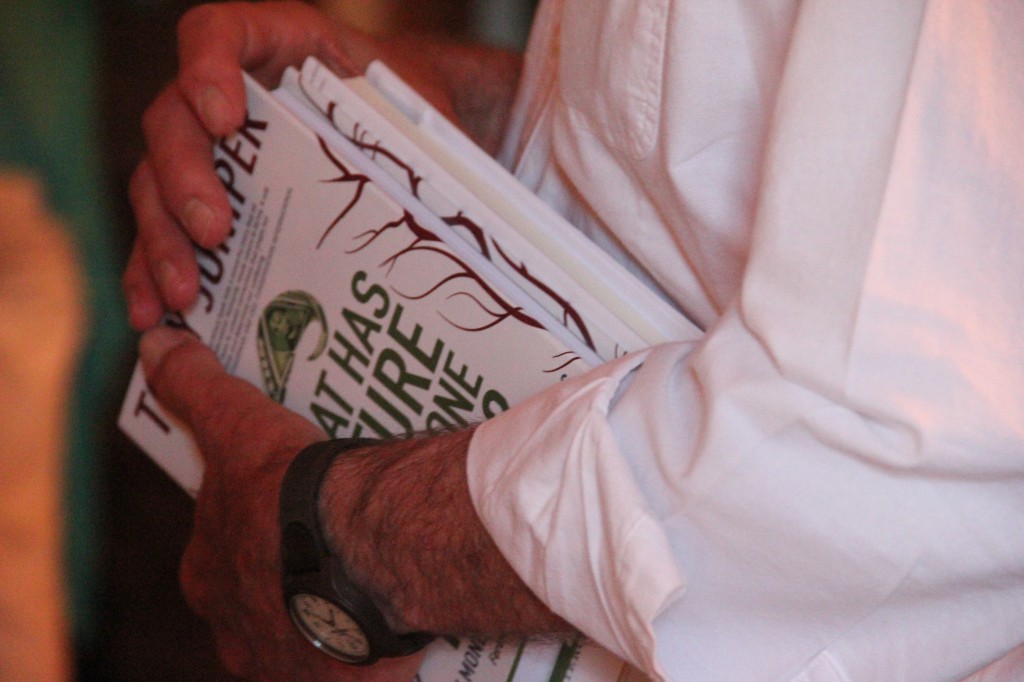 The excitement of this fellowship has sustained and remains a hot topic during dinners at Synergia Ranch. Meanwhile, publisher Deborah Snyder and the Junipers are on the road in San Francisco and Seattle continuing to spread the word about Tony’s groundbreaking work and Synergetic Press’s newest title, What has Nature Ever Done for Us? How Money Really Does grow on Trees.