Why is Ayahuasca so Popular Now?

As so many shifts are occurring on the planet and people look for ways to adapt their lives, more and more have been finding ayahuasca to be an invaluable tool in their transformation. We answered some questions about this mysterious brew and why it’s been getting so much attention.

Drawing by Kathleen Harrison. In the Ayahuasca Reader.

Ayahuasca is a sacred drink used for millennia by numerous indigenous groups primarily in the Upper Amazon and Orinoco basins for divination, healing, and other cosmogonic/shamanic purposes.

-from the Ayahuasca Reader

It’s known by many names throughout South America and is also known as yagé or yajé. The name ayahuasca translates to “vine of the soul” in Quechuan.

What is it made of?

Ayahuasca is a psychoactive brew or tea most commonly derived from Banisteriopsis caapi, a vine containing monoamine oxidase inhibitors (MAOIs), and the leaves of Psychotria viridis or other plant containing N,N-dimethyltryptamine (DMT), and often several other admixture plants.

-from the Multidisciplinary Association for Psychedelic Studies (MAPS)

Why do people use it?

There are many reasons why more people are choosing to drink ayahuasca including:

What kinds of medicinal and therapeutic properties does ayahuasca have?

It’s been gaining attention around the world for its ability to heal a wide range of diseases and conditions. Thousands of people report emotional, mental and physical healing from a wide range of conditions. To contribute to the abundance of anecdotal evidence, there have been more clinical studies scientifically investigating ayahuasca’s healing properties, including recent studies showing the effectiveness of a single use in treating recurrent depression, significant improvement among participants in therapy for treatment of addiction, and possible antitumor effects.

What are the religious or spiritual reasons for drinking ayahuasca?

People report an expanded sense of connection with all of life through visions that reveal the nature of reality. Oftentimes during ceremonies, healing songs or icaros are sung to guide participants through their journey.

In indigenous groups in Amazonia, shamans drink ayahuasca for many reasons that have spiritual significance, including to travel to other realms, gather information, finding and treating illnesses, and to communicate with other beings. For more detailed information on these rituals, see Ayahuasca Reader and Vine of The Soul: Medicine Men, Their Plants and Rituals in the Colombian Amazonia.

There are also several recognized churches that use ayahuasca as an entheogenic sacrament, including Santo Daime, Barquinha and União do Vegetal (UDV).

“Ayahuasca has a very insistent message. It’s one of those universals that almost everyone who drinks the brew sooner or later reports. It’s about the sacred, magical, enchanted, interconnected, infinitely precious nature of life on earth, and the interdependence of material and spiritual realms.” -Graham Hancock

Allen Ginsberg, speaking at the University of Pennsylvania in 1967. Photograph © by Roberth Hahn. In the Ayahuasca Reader

Indigenous groups in the Amazon have been using ayahuasca for thousands of years, with written records of ayahuasca ceremonies emerging in the early diaries of Spanish colonial priests.

In addition to the populations who have traditionally used ayahuasca, there has been a surge of interest among people all over the world. Many people including scientists, doctors, artists, musicians, writers, journalists, those who wish to be healed from disease and those who want to seek to go deeper within themselves.

Ayahuasca is legal in many countries in South America. The United States Supreme Court has unanimously ruled in favor of the legal religious use of ayahuasca by the União do Vegetal, and the U.S. Court of Appeals for the Ninth Circuit has affirmed the Santo Daime Church’s freedom to use ayahuasca for religious purposes. However, ayahuasca’s principally active ingredient—DMT—remains a Schedule I controlled substance.

-from the Multidisciplinary Association for Psychedelic Studies (MAPS)

Why is ayahuasca so popular now?

At this critical moment in human history, we are seeing a remarkable increase in the use of Ayahuasca. This voice of this profound Amazonian plant teacher has been getting louder. It calls us to find balance with the rhythms of the planet. As we see the effects of consumeristic excess waging war on the planet, the message of ayahuasca calls us to raise our Earth consciousness by examining our lives and coming into a state of harmony.

“. . . the ubiquitous simultaneous therapeutic, religious, spiritual and medicinal roles of these plants have implications for understanding the nature of human consciousness and the spiritual.” -Michael Winkleman

How can I learn more?

Conversations on Ayahuasca, Ethnomedicine, and the Biospheric Imperative with 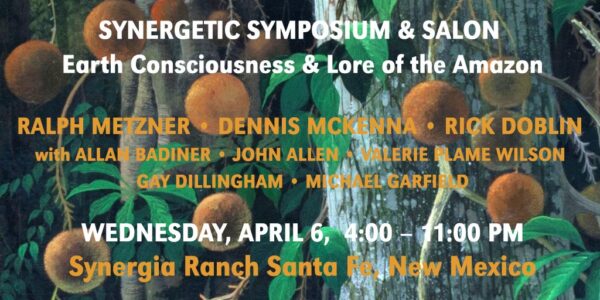 You can also find a wealth of comprehensive writings and images in Ayahuasca Reader, more ethnobotanical information in Vine of The Soul: Medicine Men, Their Plants and Rituals in the Colombian Amazonia, and a discussion of ayahuasca and Buddhist practice in Zig Zag Zen: Buddhism and Psychedelics.