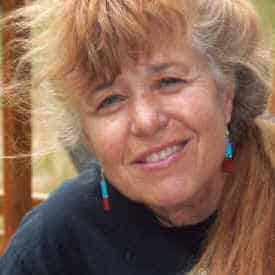 Reginah was born in The Bronx, New York and moved to Southern California at three years old. She owned and operated a number of garment industry related businesses, attended UCLA, and traveled extensively in the USA and Europe as a young adult. Reginah studied the Voice Dialogue method for several years with Dr. Sidra Stone and the late Dr. Hal Stone, eventually becoming a facilitator and teacher in this field. Her interest in psycho-spiritual paths led her to New Mexico and eventually to Marcellus Bear Heart Williams, member of the Muskogee (Creek) Nation. At the age of 42, Reginah began a very different life with Bear Heart. She worked with him as a medicine helper while they traveled in the United States, Europe, Mexico and Canada for 23 years. They eventually married in a spiritual ceremony in Oklahoma. Today she uses Voice Dialogue and art therapy tools to help expand awareness of Self and our relationships. She is a member of The Earth Tribe, an Earth-based community committed to the necessary truth that humans are but one among all species.