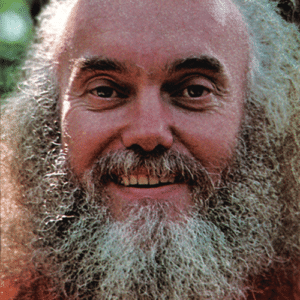 Ram Dass first went to India in 1967. He was still Dr. Richard Alpert, an already eminent Harvard psychologist and psychedelic pioneer with Dr.Timothy Leary. He had continued his psychedelic research until that fateful Eastern trip in 1967, when he traveled to India. In India, he met his guru, Neem Karoli Baba, affectionately known as Maharaj-ji, who gave Ram Dass his name, which means “servant of God.” Everything changed then – his intense dharmic life started, and he became a pivotal influence on a culture that has reverberated with the words “Be Here Now” ever since. Ram Dass’s spirit has been a guiding light for three generations, carrying along millions on the journey, helping free them from their bonds as he has worked his way through his own.

Since 1968, Ram Dass has pursued a panoramic array of spiritual methods and practices from potent ancient wisdom traditions, including bhakti or devotional yoga focused on the Hindu deity Hanuman; Buddhist meditation in the Theravadin, Mahayana Tibetan and Zen Buddhist schools, and Sufi and Jewish mystical studies. Perhaps most significantly, his practice of karma yoga or spiritual service has opened up millions of other souls to their deep, yet individuated spiritual practice and path. Ram Dass continues to uphold the bodhisatva ideal for others through his compassionate sharing of true knowledge and vision. His unique skill in getting people to cut through and feel divine love without dogma is still a positive influence on many, many people from all over the planet.