The Anthropocene: The Human Era and How It Shapes Our Planet 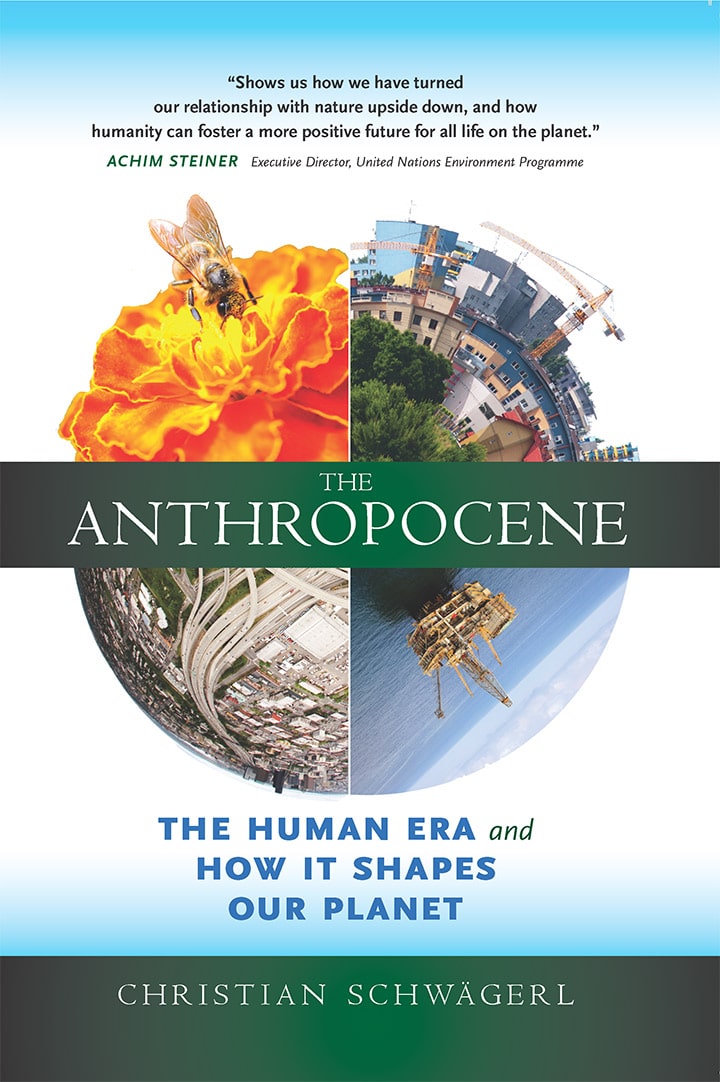 For more than two decades, award-winning science and environmental journalist, Christian Schwägerl has researched how humans, nature, and technology interact. According to Paul Crutzen, we are now living in a new geological epoch, the Anthropocene, a time in which human dominance of Earth’s biological, chemical and geological processes is an undeniable reality, presenting us with a new role as planetary stewards.

This is a thoroughly researched, comprehensive overview of our planetary situation and outlook. Schwägerl off ers tools to create realistic solutions to our ecological crises, and shares his vision of a world that balances ecological sustainability, economic prosperity, political justice and cultural vibrancy.

Christian Schwägerl is an award-winning Berlin-based journalist, author and biologist. After reporting on science, the environment, culture and politics for many years as staff correspondent for Frankfurter Allgemeine Newspaper and DER SPIEGEL magazine, he now freelances for GEO, Cicero magazine and DIE ZEIT science magazine as well as other leading national German media.

He is a past winner of the Georg von Holtzbrinck Prize for Science Journalism, Germany’s leading award for science journalists, and the Econsense Journalism Award. Other books authored by Christian Schwägerl include 11 Looming Wars: Future Conflicts About Technologies, Resources, Territories and Food (with Andreas Rinke, 2012) and The Analog Revolution: When Technology Becomes Alive and Nature Fuses with the Internet (2014). Since 2014, Schwägerl has been head of the Masterclass Future of Science Journalism for the Bosch Foundation and Reporter Forum.

Schwägerl is one of the creators and project leaders of The Anthropocene Project, a three-year collaboration in Berlin at Haus der Kulturen der Welt cultural center as well as an external curator for the ongoing special exhibition on the Anthropocene at Deutsche Museum Munich, the world’s largest technology museum.

Christian Schwägerl combines rigorous scientific training with award-winning journalistic experience to bring attention to the most pressing environmental issues we face at this transitional time.

For more than two decades, award-winning science and environmental journalist, Christian Schwägerl has researched how humans, nature, and technology interact. Schwägerl is inspired by the idea of Nobel Prize-winning chemist Paul Crutzen who argued that we are living in a new geological epoch, the Anthropocene, a time in which human dominance of Earth’s biological, chemical and geological processes is an undeniable reality, presenting us with a new role as planetary stewards. But what does it mean to live in the Anthropocene? In his passionate, first-person global travelogue, Schwägerl investigates this question by visiting some of the last pristine places on Earth, exploring rising megacities and witnessing the devastation of forests and coral reefs. Melding rigorous scientific training with his experience as a journalist, he has covered high-profile political and environmental conferences, and interviewed key figures influencing the course of our future. The result is this thoroughly researched, comprehensive overview of our planetary situation and outlook. Schwägerl presents tangible solutions to our global crises, and shares his vision of a world that balances ecological sustainability, economic prosperity, political justice and cultural vibrancy. The Anthropocene was praised by Achim Steiner, Executive Director of the UN Environment Programme (UNEP) as an “intellectually exciting book” which “shows us how we humans turn our relationship with Nature upside down. Over millennia we were rebels against a more powerful force. Now it is we who decide what will be Nature tomorrow and after, e.g. by determining the climate and altering the oceans. ” TRANSLATED FROM GERMAN BY LUCY RENNER JONES.

This is a splendid introduction to The Anthropocene by one of its most eloquent celebrants. I’m especially moved by Schwagerl’s conversations with Paul Crutzen and other scientists at the heart of the Anthropocene debates…. Scholars will appreciate his long tenure with the subject and the depth of his research.—Diane Ackerman, author of The Human Age

Whether idealistic or not as a solution for how humankind impacts the planet, The Anthropocene: The Human Era and How It Shapes Our Planet is a fantastic journey filled with remarkable facts and deep scientific insight into the Anthropocene, an age that everybody needs to understand with the depth of knowledge Schwägerl brings to the subject. His book is an easy, fast read that enlightens, page by page. Idealism leads to workable ideals. (Exerpted from full review here.)
—Robert Hunziker, Human Made Evolution, July 31, 2015

Woe is Earth. Drilled silly, dumped on, farmed out, fished out, and cloaked in a burka of carbon—who does the planet have to thank for this dire state of affairs? Only its most highly evolved species, of course. Enter Christian Schwägerl‘s The Anthropocene: The Human Era and How It Shapes Our Planet, in which he justifies use of the term “Anthropocene” to designate a new human geological era based on the changes we’ve caused and our vital role as planetary stewards. Schwägerl and others (Nobel Prize winner Paul Crutzen, for instance) are championing the relationship between humans and nature as a revolutionary science-driven force.
—Matt Sutherland, February 27, 2015
Foreword Magazine (Full Review Here.)

Brilliant exposition of the new paradigm.This is the book I was hoping would someday be written! Christian Schwagerl’s account of how our modern biosphere is extensively impacted and shaped by human technology will surely become a primary sourcebook. He not only traces the history of the concept and the controversies about how to define and date its advent. But the book goes further and is an inspired and inspiring investigation of how new ways of thinking about our relationship with the biosphere can lead to more positive outcomes. The book is richly footnoted and extensively researched, providing readers with the tools to follow topics of particular interest. He decisively rejects the position of pessimism which too many environmentalists adopt, showing that we are only at the opening of this new chapter in geologic and human history. The book offers fresh thinking about our biosphere, human culture and technology, and where we are in the grand schemes of all. Down to earth and uplifting at the same time, the book does not gloss over the magnitude and depth of our current situation. It provides a clear exposition of a new framework for re-thinking what Vernadsky and the Russian biospheric thinkers see as the grand challenge of our times: harmonizing our technosphere with the biosphere.

This is a meticulous, thorough, enlightening account of the rise of humanity and its technics to become the most dynamic geological force on Planet Earth to date, creating the first man-made geological epoch many call the Anthropocene. Schwägerl indicates convincingly how we humans can make this epoch extremely creative and biosphere enhancing. He shows how our technics, if devoted to maximizing profits, prestige, and power, can wreak horrors of destruction. A must read by everyone interested in understanding the present, increasing ecological crisis. Only by understanding that we humans and our technologies can play creative role on a planetary scale, can we play that role as creative agents, rather than as part of its destructive force.

For better or worse, this is the age of the human, with the choices that we make affecting the Earth on a geological scale. Such is the premise of The Anthropocene, written by Christian Schwagerl and given to me by a publicist who found my sweet spot for Doomsday literature. Schwagerl argues that our human population growth, our space needs (for living and building and destroying), and our energy consumption are enough to signal an entire change of epochs, leading to this Anthropocene. Schwagerl claims that humans have so altered our condition socially, economically, and technologically that we are now unable to live without these structures. In the Anthropocene epoch, Schwagerl theorizes that we’ll have to rely on our man-made management of our environment entirely; there will be no more “wild,” and no more natural resources to exploit. If you’re noticing that this hasn’t happened yet, then you’re not wrong. Schwagerl writes that “our dominance over the Earth has developed more quickly than our ability to reason and be responsible.” If we’re going to make it through the Anthropocene without having to enact our Zombie Escape Plans or Pandemic Survival Plans, however, we are going to need to jump-start those reasoning skills and that sense of responsibility, and we are going to need to do it yesterday. (Excerpted from link below, from Insteading.com)

If you want to do more than explore the world but want to understand it, “The Anthropocene: The Human Era and How it Shapes our Planet” is your book. Christian Schwagerl goes beyond amazement and wonder to present readers with the tools for understanding our new relationship with nature so we can both survive and thrive on the planet we are busy shaping and changing. Because it does go beyond describing the forces at work, “The Anthropocene” becomes the best book written on the subject to date by presenting a new rubric for our relationship with nature where we are neither in it or outside of it.
This is a book for realists who love their planet, and want to help shape sustainable attainable biospheric futures that are beautiful and inspirational. (Excerpted)
— Johanna Eurich; resident of the Arctic, cross-cultural communicator, journalist and gardener.

Be the first to review “The Anthropocene: The Human Era and How It Shapes Our Planet”