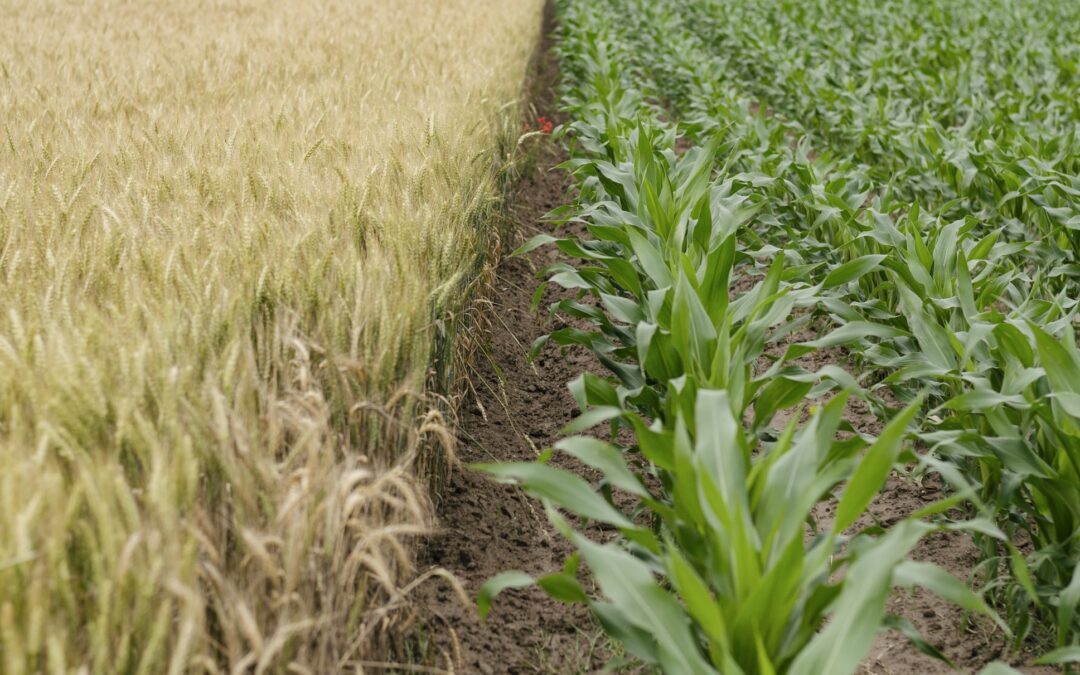 Since the early 20th century, multinational corporations have repeatedly claimed ownership of nature and indigenous knowledge systems from developing countries by means of patents, turning the biodiversity of the commons into private, commercialized property. This appropriation of indigenous resources for financial gain, with scarcely any recognition or compensation, is just one of the latest forms of colonialism, the centuries-old practice of affluent, technologically advanced nations exerting economic dominance over poorer, resource-rich countries.

In the upcoming Synergetic Press title Reclaiming the Commons: Biodiversity, Indigenous Knowledge, and the Rights of Mother Earth, environmental activist and food sovereignty advocate Dr. Vandana Shiva lays out in great detail the legal struggle to defend biodiversity against biopiracy and biocolonialism. 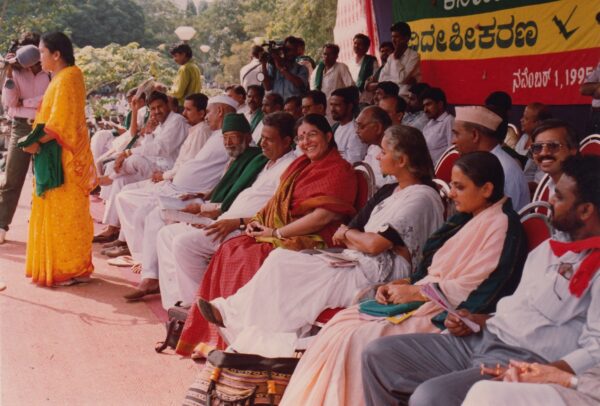 Biopiracy is when a corporation patents seeds and/or indigenous knowledge, gaining exclusive control over those materials.

Through intellectual property laws created by Western nations, they can legally lay claim on plants and traditional applications of knowledge, despite the fact they have not innovated or invented anything. The burden of proof then lies on the affected community, which often does not possess the resources or legal knowledge to contest the claims.

One glaring example of biopiracy the case of the neem tree, which has been an invaluable, “cure-all” resource in India for centuries, and can be sourced back to a number of ancient texts. One of its applications was agricultural – a potent insecticide, neem was fed to livestock to increase soil fertility.

In the 20th century, the general American public became increasingly skeptical towards synthetic pesticides. Naturally, this sparked a corporate interest in neem, with the industry seeing lucrative potential in its natural appeal for American consumers. Since 1985, over a dozen US patents have been taken out on neem-based solutions and emulsions. As a result, prices skyrocketed, depriving local farmers of access to their traditional plant material, and making them dependent on the company owning the patent.

Another example of biopiracy: a poster by Navdanya, an Indian-based non-governmental organization that promotes biodiversity conservation cofounded by Vandana Shiva, protesting corporations’ patent of rice.

Thanks to Western intellectual property right systems (IPRs), corporations (mostly pharmaceutical and agrochemical companies) have been able to scour biodiversity-rich countries for their resources and traditional knowledge, and gain exclusive monopoly rights to anything with commercial value via patent laws. This effectively restricts those communities from access to biological resources that have been part of their cultural heritage for centuries.

Biopiracy has drastically affected the livelihood of farmers, who are cut off from the seeds they’ve relied on for centuries. Farmers are no longer allowed to exchange seed as they used to since that is now a crime under intellectual property laws. They are forced to buy seed from these corporations, rather than saving it, and generate profits for them. According to Shiva, most of the 300,000 farmer suicides in India happened as a result of Monsanto’s falsely claiming patents on cotton, and trapping farmers in debt through cotton royalties.

It also has a destructive effect on the environment. Often, the biodiversity of the affected regions become eroded due to practices like monocropping, the practice of growing large amounts of a single crop on the same land. While this may be economically fruitful, it does not provide the diversity needed for a healthy diet or ecosystem.

Throughout the long history of colonialism, and into the present day, Westerners have regarded indigenous knowledge systems of medicine and agriculture as primitive and inferior. Hundreds of years of rich and diverse traditional medicine systems, like Ayurveda, homeopathy, and Traditional Chinese Medicine, are dismissed as unscientific – unless, of course, their knowledge is found to be useful, in which case they are appropriated and legitimized without credit.

There also exists a fundamental tension between Western and indigenous ideas around ownership. Private property is a keystone of Western society. Traditional IPRs, which are shaped by major Western nations, reflect this individualistic value system and work in favor of corporations that seek to monopolize and control any resource that turns a profit. In contrast, indigenous perspectives are more communally oriented, recognizing the land and water to be a sacred heritage shared by everyone.

The national sovereignty and basic needs of these regions are compromised in the name of free trade and commerce. The World Trade Organization, an intergovernmental organization that regulates international trade, has created systems of law that benefit the multinational corporations, and harm small communities.

In this 2003 Guardian article, Shiva writes:

The trade-related intellectual property rights (Trips) agreement is the most far-reaching of all the WTO agreements and threatens to hurt us most. It has changed the law related to patents, copyright, design, and trademarks from national to global levels and redefined vital issues of farmers’ rights to seeds and citizens’ rights to medicine as trade issues. It has also expanded patentability to cover life forms, even though living organisms are not invention. For the US, which forced the changes through, these were matters of commerce. For us, intellectual property rights are matters of national sovereignty and basic needs. 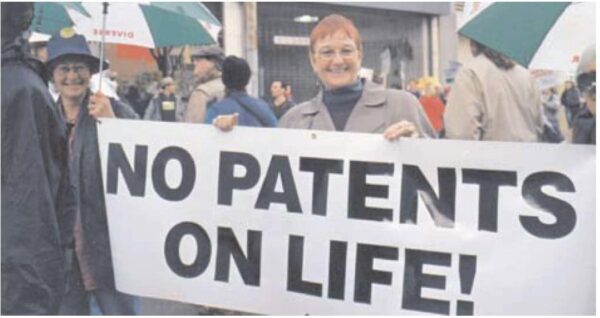 There have been some positive steps made towards defending against biopiracy.

The Convention on Biological Diversity, a multilateral treaty signed in 1993, was created with the goal of “conservation of biological diversity, the sustainable use of its components and the fair and equitable sharing of the benefits arising out of the utilization of genetic resources.”

Since then, there have been two supplementary agreements made to the convention. One is the Cartagena Protocol on Biosafety, effective 2003, which “aims to ensure the safe handling, transport and use of living modified organisms (LMOs) resulting from modern biotechnology that may have adverse effects on biological diversity.” The other is the Nagoya Protocol, effective 2014, which “aims at sharing the benefits arising from the utilization of genetic resources in a fair and equitable way.”

There have also been legal cases between corporations and indigenous people in which the latter were ruled in favor.

In 2019, PepsiCo sued 4 farmers for 10 million rupees each for growing a variety of potatoes registered by the company. They claimed their intellectual property rights were being infringed upon under the Protection of Plant Varieties and Farmers Rights Act, 2001. However, according to the actual details of the act, the farmers were well within their rights to harvest the seed. Pepsico used false claims and intimidation tactics to nearly ruin the lives of farmers who earned a fraction of what they were being sued for annually.

Reclaiming the Commons is the latest in over 20 books authored by Shiva on biopiracy and environmental justice. It presents details on the specific attempts made by corporations to secure patents on nature, and the legal action taken against them. It is the first detailed legal history of the international and national laws related to biodiversity and international property rights. 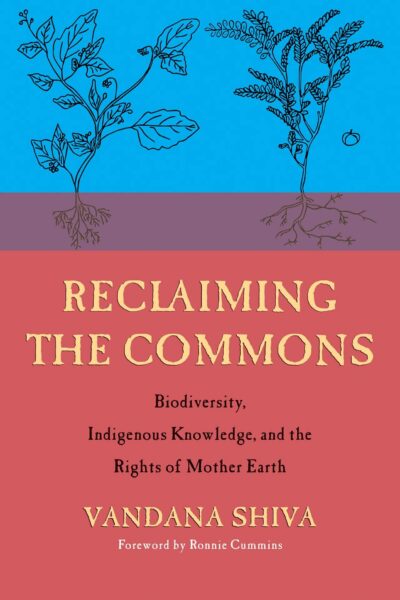 Learn more about Reclaiming the Commons

The neem tree – a case history of biopiracy
by Vandana Shiva
https://twn.my/title/pir-ch.htm

Points of Law in the Pepsico Potato Case

Living on the Frontline
by Vandana Shiva

The Convention on Biological Diversity

Seeds of Sustenance & Freedom vs Seeds of Suicide & Surveillance