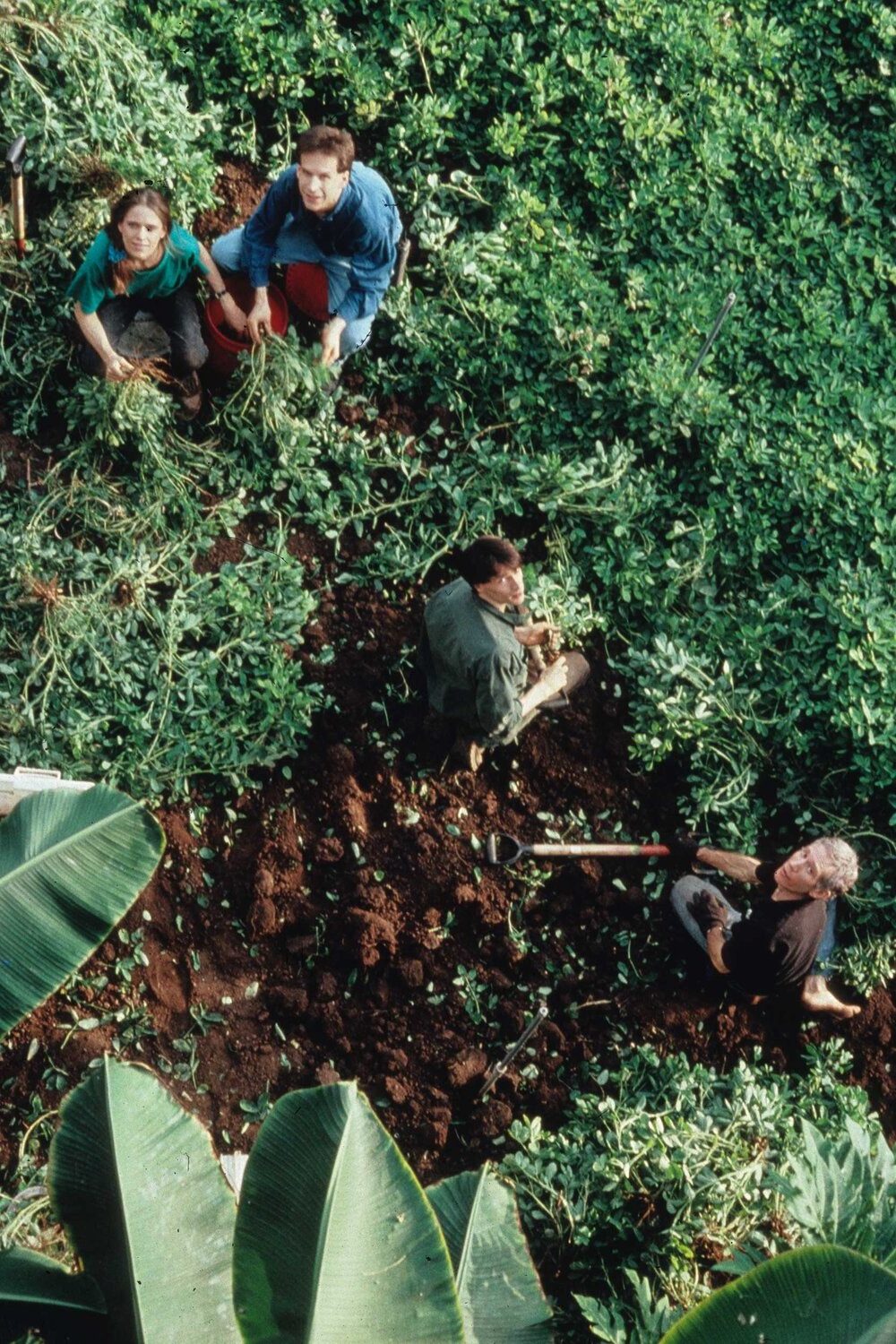 What was it like to be “quarantined” inside a giant laboratory for twenty-four months? Our new book Life Under Glass: Crucial Lessons in Planetary Stewardship from Two Years in Biosphere 2 tells the inside story of Biosphere 2, presenting the only account written inside of the two-year enclosure.

Eight volunteers placed themselves in the world’s first mini-biospheric system, a facility that included a range of wilderness biomes as well as farm and human living area. This biospheric laboratory designed to be a new kind of experimental ecological apparatus research is where they lived separate from Earth’s biosphere for the first two-year closure mission. During this time, the biospherians devoted themselves to caring for and studying their small world, recycling their air, water, and wastes as well as growing their own food.

We interviewed author and biospherian crew member Mark Nelson to better understand the insights gained from living in Biosphere 2, and how we can move towards being better planetary stewards individually.

Mark Nelson: Planetary stewardship is not necessarily about managing the biosphere [Earth], rather it has to do with managing ourselves and the human impacts on our planetary biosphere. I think Biosphere 2 has a number of teachings that are of crucial relevance to what is probably the greatest challenge of the 21st century. First, Biosphere 2’s lessons should motivate us to reassess how we design our technosphere; how we do business, how we farm, how we ranch, how we manufacture, and how we transport. We are coming to understand more and more, that everything we do has consequences for our global biosphere, our underappreciated life support system, affecting its natural cycles. Biosphere 2 was an amazing experiment in how to redesign and re-engineer a non-polluting technological system that is truly in service to the betterment of all life.

That being said, what are simple, affordable, and easy steps that we can take on the individual level toward becoming better planetary stewards or better biospherians?

I get emotional when I give talks and people ask “What is the first thing that I can do to become a better biospherian?” My advice is to start by falling in love with the biosphere. In order to want to save something, you have to love it. Beyond falling in love, you need to rid yourself of the illusion that you are not in every moment of your life being supported and interacting metabolically with Earth’s biosphere. Literally every breath of air that you take is a product of our biospheric system. Our current ideas about the biosphere feed into an erroneous, dualistic, dyadic vision in which us humans are separate from the Earth. Even to imagine that the technosphere is opposed to the biosphere is incorrect – it is an integral element of the Earth’s biosphere. We need to move past the idea that the biosphere and the environment is something outside of ourselves. We need what the Greeks called metanoia, a profound change of thinking to come to realize that we are all biospherians. Stepping back from the illusion that there is the world of life separate from you is a great beginning for understanding what it means to be a biospherian. We will only be motivated to take care of our biosphere if we change our illusion that we’re not part of the systems and that it is something outside of ourselves. Biosphere 2 offered this understanding in a very experiential mode in that all of the biospherian crew members, and even those who went into our test module, grasped on a somatic, bodily level that they are connected to the biosphere. And what a great realization that is! 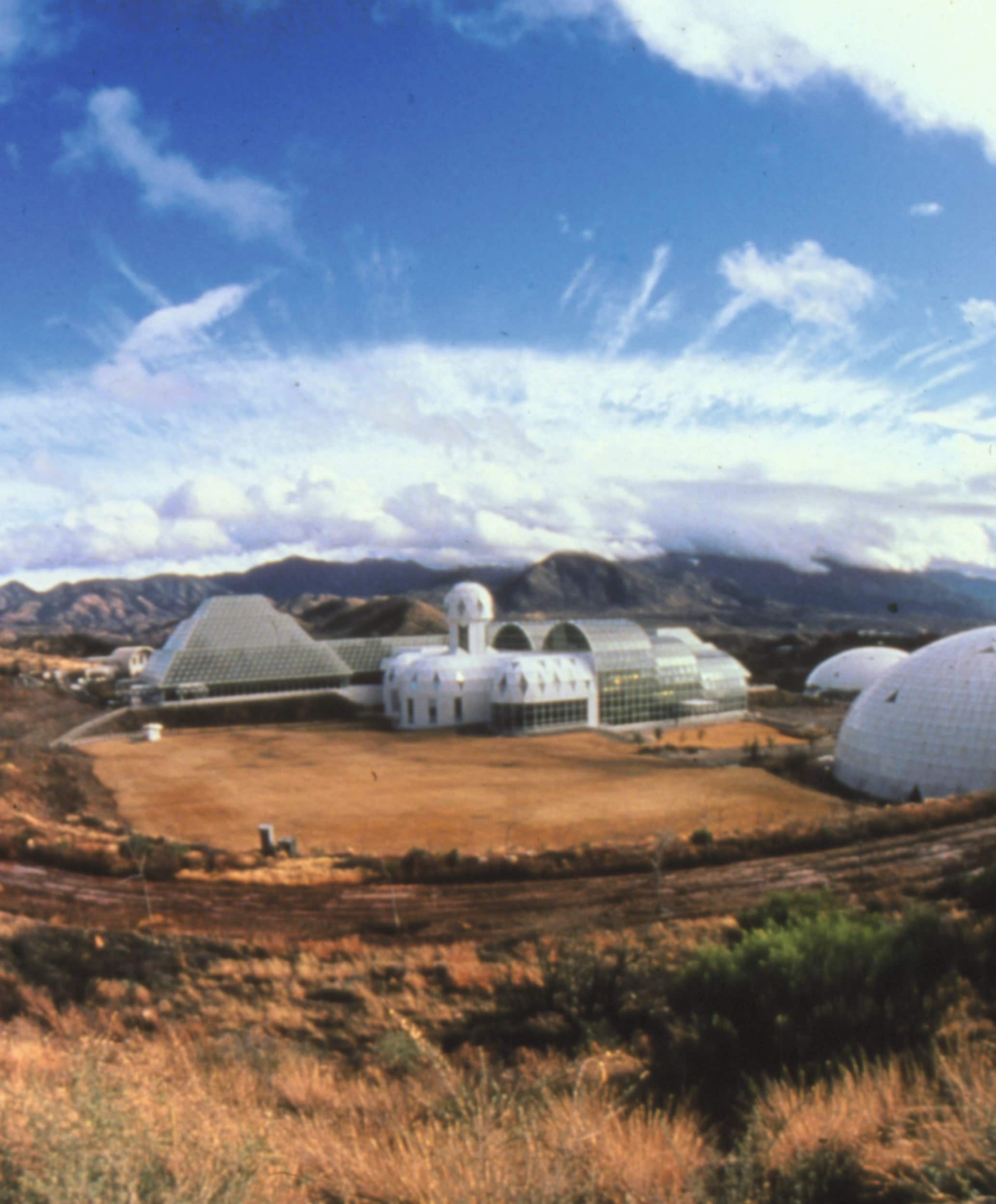 Do you see any parallels between your two-year experiment in Biosphere 2 and the current global situation of being quarantined due to COVID-19?

Many people have been asking me about the parallels between our two-year experiment in Biosphere 2, and the COVID-19 quarantine. For us biospherians, we left an unappreciated and daily degraded biosphere (Earth), and entered a new world with the objective of assisting that new world to grow up to be beautiful, and maintain its biodiversity. In Biosphere 2, we went into as clean an environment as engineers and ecologists could possibly devise, motivated by the self-interested goal of becoming good stewards of that system. We also had the knowledge that the health of our biosphere was inextricably interconnected with our bodily health. We knew that we were metabolically inseparable from the Biosphere, having a real sense that Biosphere 2 was our lifeboat.

However, in the current situation, people are in quarantine because there is a dangerous disease agent that is out there. Despite the gravity of the situation, we are looking out of our windows at a more beautiful world. We have finally slowed down our assault on the biosphere and stopped taking for granted the miraculous processes that give us clean air, water, and food. The ‘business as usual’ approach has slowed down as a result of our quarantine, and our biosphere has become a cleaner, healthier place. We are seeing wildlife regain some confidence, pollution is decreasing, and we are finally meeting greenhouse gas and climate change goals. People are really waking up to the fact that we have a tremendous impact on our biosphere and that there is not an environment external to us. There are no small actions, everything we do has an impact for good or for ill. That truth was super obvious in Biosphere 2, but is equally true on Earth. The current situation with coronavirus serves as a good shock point for the global cadre of biospherians. Being temporarily locked out of business as usual I deeply hope will allow us to rethink what will happen when we resume “normal” life.

What are some of the main lessons that came out of Biosphere 2?

Biosphere 2 presented a challenge to the exploitative and extractive way that modern business i.e.,  large-scale capitalism thinks about our earth. Biosphere 2 made a big statement as it included a range of wilderness biomes like a tropical rainforest, a desert, an Everglades marsh, and even an ocean with a living coral reef. Each biome had intrinsic value because it made our mini-world more beautiful, and provided habitat for some of the other species that share our biosphere. Like nature does on Earth, those natural biomes contributed to the quality of our air and water as well as the joy of living in a wondrous world.

It was recognized that each biome had its own integrity and was not free for humans to convert to farm or ranch land or exploit for natural resources. Our role within each biome was to protect its integrity, to protect against loss of biodiversity, and to keep an eye on their overall health because we knew our bodily health depended on the health of the system as a whole. People who came to Biosphere 2 saw its biospherian crew taking tender, loving care of their environment. We learned by listening to our biosphere. I think that is a very powerful lesson in planetary stewardship that can be extrapolated from Biosphere 2. This new edition of Life Under Glass is a great way to appreciate the drama, the joy, the adventure we had during the two years.

Another great lesson was that even in a mini-biome using technology to supplement the natural functions that weren’t present, it was clear that humans and technology were not dominating or “controlling” the environment. Ultimately the microbes, fungi, plants, animals, and atmospheric cycles that we were helping to maintain were responsible for our health. Nowadays, we are so in love with the technologies that we have invented and sometimes become very grandiose, running away with the notion that humans run the biosphere. Thank goodness we don’t. 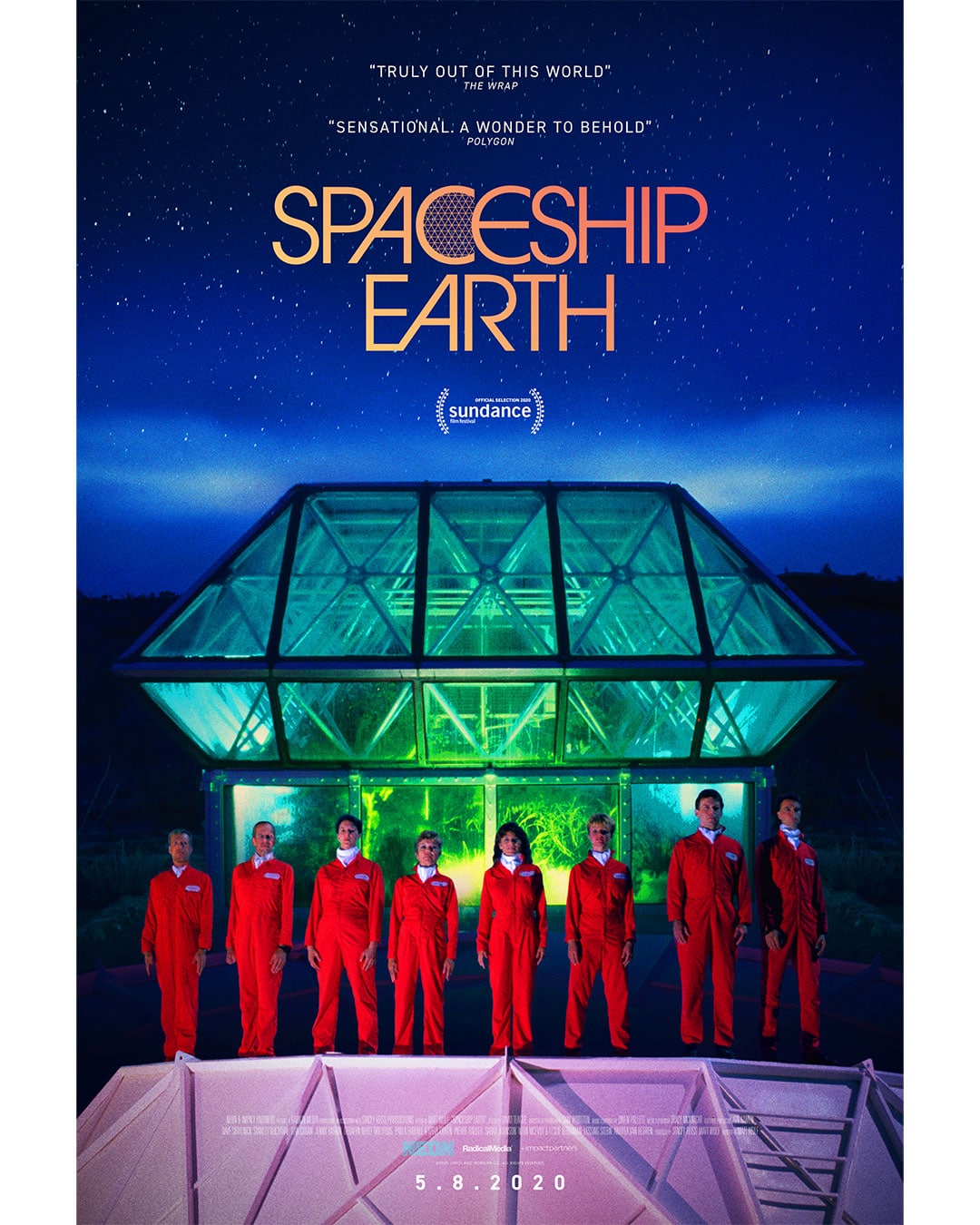 The film Spaceship Earth chronicles the true, stranger-than-fiction adventure of eight visionaries who in 1991 spent two years quarantined inside of a self-engineered replica of Earth’s ecosystem called BIOSPHERE 2. As the current pandemic forces us to confront the fact that the narratives that inform our modern-day existence do not serve us, this tale of dreamers reimagining a new world may inspire our own vision of the future. The film is now available to stream in the US and will be released in Europe this July.

“To have a research station on another planet, we have to figure out how to recreate a tiny biosphere for humans. That’s what the Biosphere 2 project in Arizona was trying to do in 1991. I was so interested in this experiment that I spent time locked inside their test module. But this $150 million structure was built by a theater group instead of scientists, and therein lies the drama worthy of a film. Skip the comedy (Biodome, 1996) and watch Spaceship Earth (2020), a new sympathetic documentary on this remarkable project. What they learned, of life support and human dynamics, should be better known. (Imagine being really locked down for 2 years.)” — Kevin Kelly, founding executive editor of Wired magazine 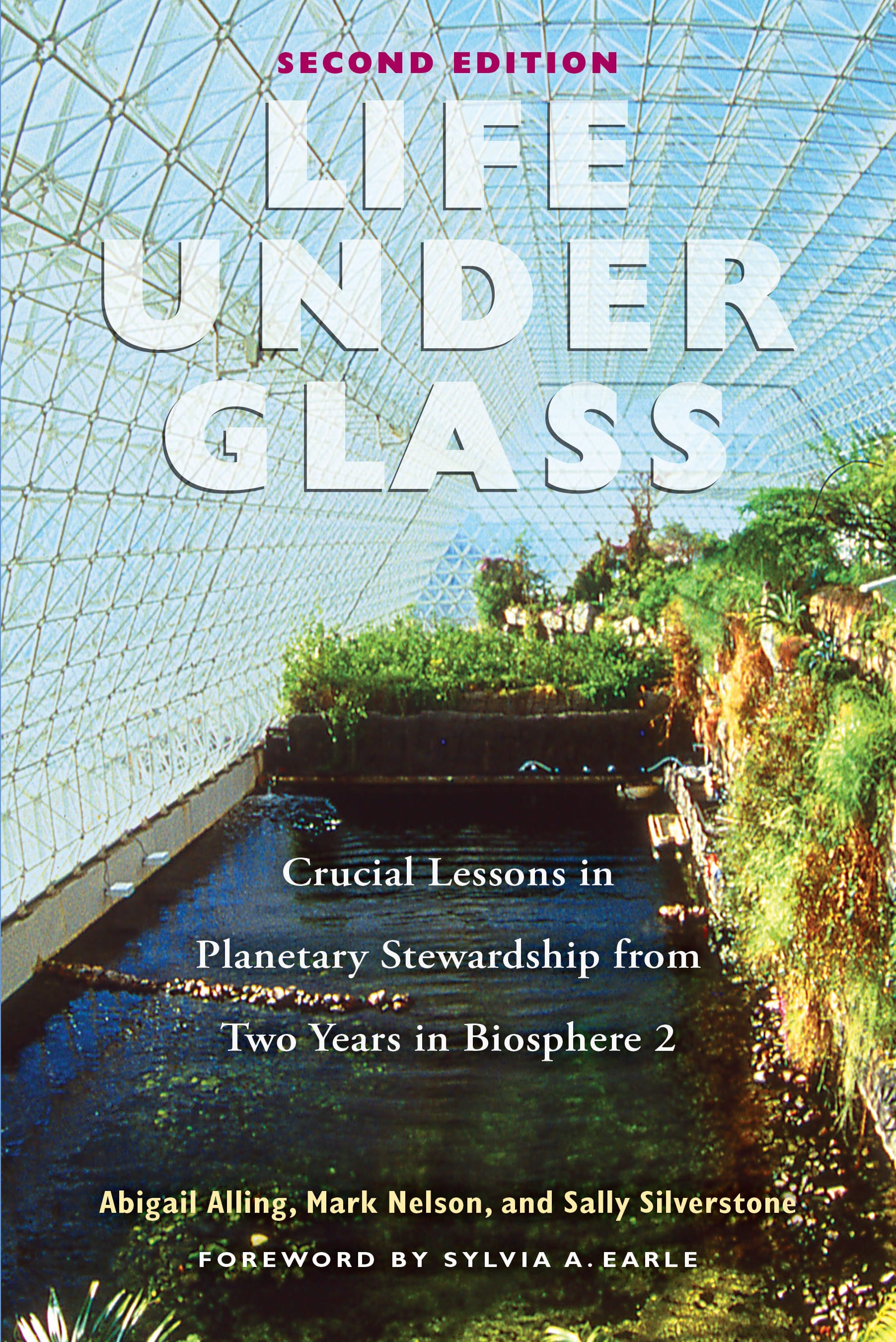 Life Under Glass: Crucial Lessons in Planetary Stewardship from Two Years in Biosphere 2

Planet in a bottle. Eden revisited. Laboratory under glass. The largest self-sustaining closed ecological system ever made. Biosphere 2 is many things to many people. From its half-acre farm to its coral reef to its emerald rainforest—this unique research facility has proven itself a marvel of human engineering and a testament to the human imagination.

For two years, four men and four women lived and worked inside the structure, recycling their air, water, food, and wastes, and setting a world record for living in an isolated environment. But what has this giant glass-and-steel greenhouse been to those most intimately involved with it? What has it meant to the first crew who studied and cared for it? What was it really like to be sealed inside a giant laboratory for twenty-four months?

“Life Under Glass details an extraordinary scientific experiment, one in which a handful of idealistic citizen scientists, at considerable personal risk, volunteered to enter a closed system, Biosphere 2. The audacity of the effort brings to mind that famous quote of Teddy Roosevelt in which he hails not the critics, but those in the arena who strive valiantly, who spend themselves in a worthy cause, and who, if they fail, do so while daring greatly, their faces marred by dust and sweat and blood.” – Professor Wade Davis, BC Leadership Chair in Cultures and Ecosystems at Risk, University of British Columbia, Vancouver

Get your copy now!