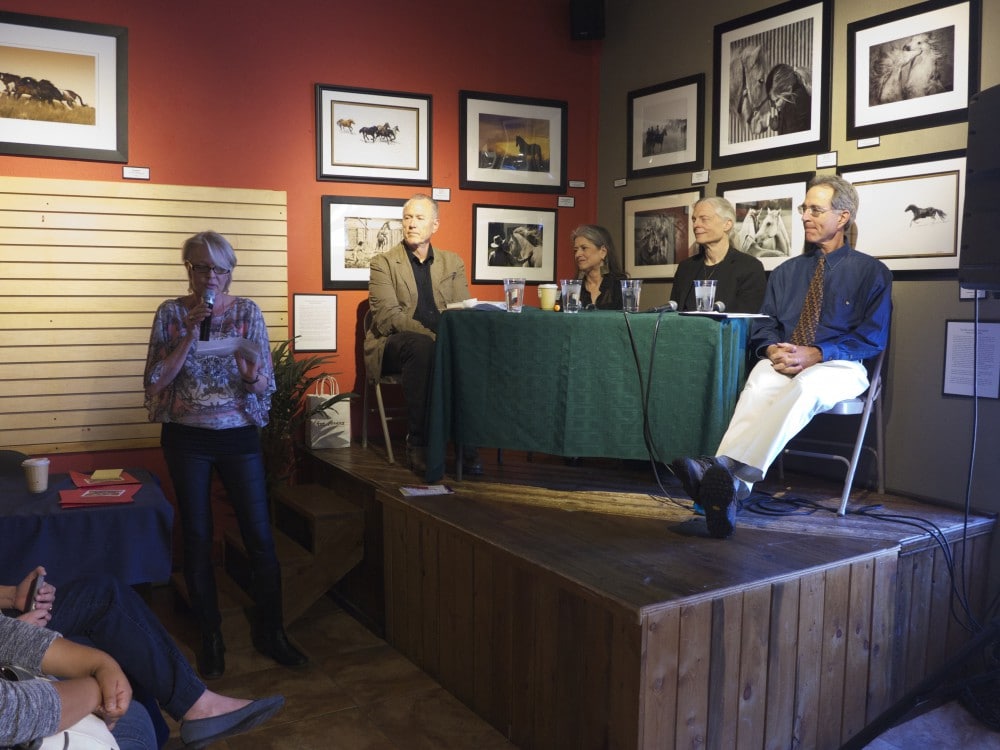 Last Tuesday night, Collected Works Bookstore in Santa Fe, New Mexico was full of curious congregants who had gathered to hear a discussion on Buddhism, psychedelics and visionary art. Every seat was filled, and even the window ledges were occupied with eager attendants. Seated around a table at the front of the space the panel of speakers for the evening faced the crowd. 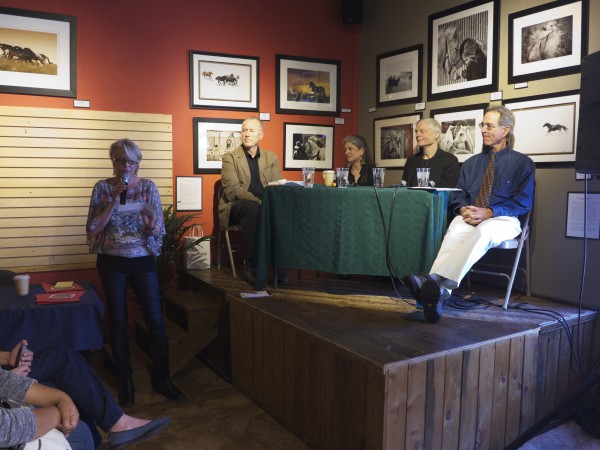 Allan Badiner, the editor of Zig Zag Zen: Buddhism and Psychedelics is also a contributing editor for Tricycle magazine and has edited two other books dealing with Buddhism and the environment. Alex Grey, the art editor of Zig Zag Zen is one of the most prominent visionary artists in the world today who co-founded the Chapel of Sacred Mirrors. Allyson Grey, a contributing artist to Zig Zag Zen focuses her work around geometric and esoteric principles of order, chaos and secret writing and cofounded the Chapel of Sacred Mirrors. Dr. Rick Strassman, a contributing author is clinical associate professor of psychiatry at the University of New Mexico School of Medicine and has conducted federally funded research on the DMT experience.

Allan began the conversation by recounting an experience he had while studying with Thich Naht Hanh at Plum Village. While sharing stories in a Dharma discussion group each of the participants revealed that they had experience with psychedelics and that those experiences paved the way to their later Buddhist practice. When many of the practitioners moved to Buddhism, they let go of their psychedelic use.

Allan then shared how he got the inspiration for creating a book around this issue. While on retreat at Tassajara Zen Mountain Center, as he was reading through the guest book he found an entry with a drawing of a pack of Zig Zag rolling papers that read “Wow, I thought I’d miss these a lot more than I did.” Upon seeing the pack of Zig Zag papers at the Zen center, Zig Zag Zen was born.

While many American Buddhist practitioners share a psychedelic background, the intention for the book was to create a well-balanced examination of the subject. Not a book that would draw any conclusions for you. And some of the contributors who were included do not believe Buddhism and psychedelics should even be thought of together.

So, why create a new edition of this book? Because we find ourselves in a fairly unique situation in the history of humanity. We have the power to manipulate nature and affect the mechanisms of climate. And as we’ve gained this power, we find ourselves in the midst of another mass extinction. In much the same way that as people grow older they reach back to the religion of their youth to search for meaning, now we can see society reaching out to religions as a way to make sense of its growing fear. By shifting our consciousness through spiritual development, we can make the kinds of radical changes required for us to survive.

Allan shared the following quote from Dr. Albert Hofmann, which emphasizes the importance of consciousness change to enact the kinds of changes necessary to heal the planet.

“Alienation from nature and the loss of the experience of being part of the living creation is the greatest tragedy of our materialistic era. It is the causative reason for ecological devastation and climate change.
Therefore I attribute absolute highest importance to consciousness change. I regard psychedelics as catalyzers for this. They are tools which are guiding our perception toward other deeper areas of our human existence, so that we again become aware of our spiritual essence. Psychedelic experiences in a safe setting can help our consciousness open up to this sensation of connection and of being one with nature.
LSD and related substances are not drugs in the usual sense, but are part of the sacred substances, which have been used for thousand of years in ritual settings. The classic psychedelics like LSD, Psilocybin and Mescaline are characterized by the fact that they are neither toxic nor addictive. It is my great concern to separate psychedelics from the ongoing debates about drugs, and to highlight the tremendous potential inherent to these substances for self-awareness, as an adjunct in therapy, and for fundamental research into the human mind.
It is my wish that a modern Eleusis will emerge, in which seeking humans can learn to have transcendent experiences with sacred substances in a safe setting. I am convinced that these soul-opening, mind-revealing substances will find their appropriate place in our society and our culture.”
—Dr. Albert Hofmann
Thursday, April 19, 2007 (at age 101)

Alex cited Albert Hofmann’s influence in bringing him to the psychedelic dimension, and he shared the transformative power of his first LSD trip on Allyson’s couch 40 years ago while they were in art school together. He discussed the power that psychedelics provide artists to portray sacred dimensions. Visionary artists translate their ineffable mystical experiences by incorporating the archetypal elements of these visionary mystical experiences, such as the kinds of beings present, the temples and realms visited, the kinds of lights seen, and the sacred messages received.

He described the cover of Zig Zag Zen, which features the Tibetan Guru Padmasambhava displaying the rainbow-body. This wavy light-body is one of the first things we start to see on psychedelics. We start to notice the light-body in people as our higher perception takes over, whether that be through spiritual practice or the use of entheogens; and as our materialism reverses we see the light underlying all beings. This allows the revolution to happen quickly so that we can stop the self-destructive suicidal tendencies in ourselves and in society. As we see ourselves careening towards a self-destructive end, this medicine is our last best possibility to change ourselves and our planet.

Allyson described the similarity between psychedelics and religions. She said that religions are here to teach and to heal, which is what psychedelics do as well, they teach us. She told about her early, casual psychedelic use as a teenager, leading to a time when she took a heavy dose intending to see the White Light, and she understood God, and the sacredness of symbols. This trip led her to pursue meditation practices and follow a spiritual direction.

Rick shared his scientific perspective on the biological basis of spiritual experiences. After practicing for decades with a western Zen Buddhist order, he became interested in exploring the overlap he noticed between the states produced by psychedelic drugs with the states attained by eastern meditation techniques and the underlying biology they may have in common.

Even if you weren’t able to attend this exciting event with us, you can still keep up with the world of Zig Zag Zen by checking out what else we’ve been up to: 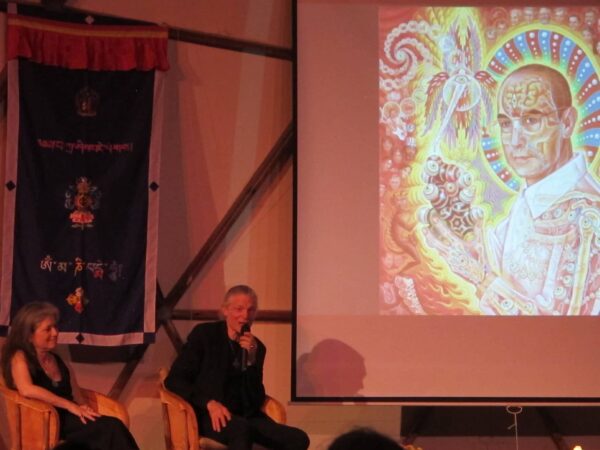 Alex Grey sharing the inspiration for his painting “St. Albert and the LSD Revelation Revolution.”

Allan Badiner and Dr. Rick Strassman were interviewed on Santa Fe Radio Café by host Mary-Charlotte on May 21st.
Here is a link to that interview:
[su_audio url=”https://www.synergeticpress.com/wp-content/uploads/2015/05/strassman.mp3″ width=”50%”]

Allan Badiner,  Alex Grey and Allyson Grey were interviewed on the Camp Lovewave show by Terran and Bari on May 23rd. You can listen to that interview here:
[su_audio url=”https://soundcloud.com/camp-lovewave/camp-742-zig-zag-zen-52316https://soundcloud.com/camp-lovewave/camp-742-zig-zag-zen-52316″ width=”50%”]

You can also purchase your own copy of the new edition of Zig Zag Zen: Buddhism and Psychedelics! Zig Zag Zen is full of more interviews, round table discussions, public dialogues, academic inquiries, personal stories, and visionary art to open your heart, expand your mind and squeegee your third eye.

Acclimating to the Anthropocene