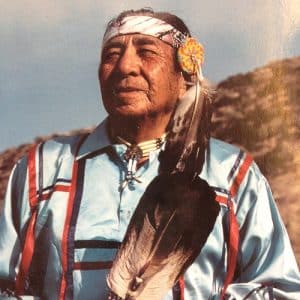 Marcellus Bear Heart Williams was born a full-blooded member of the Muscogee Nation, Creek Tribe in Okemah, Oklahoma. Bear Heart studied Creek medicine for 14 years under two medicine men of his tribe and was one of the last traditionally trained "medicine persons." He was a Roadman in the Native American Church, Baptist Minister, World War II veteran, and internationally respected advisor. He spoke 14 languages, 13 of them Native. Bear Heart received formal education from the all-Indian Bacone College in Muscogee, Oklahoma and earned a divinity degree from Andover Newton Theological Seminary in Boston, Massachusetts with a major in Biblical Greek. Because of his intense curiosity, breadth of experience, and open heart, his counsel and advice were widely sought. He prayed with President Truman, spoke at the opening of the Smithsonian Native American Museum, and was a spiritual counselor for firemen and their families after the Oklahoma City tragedy in 1995. He served on President Bush's Faith-Based Initiative Panel for the US Department of Health's "When Terror Strikes" conference in New York, and put down prayers with police and firemen at Ground Zero in New York City. Bear Heart’s first book, The Wind Is My Mother, has been translated into 14 languages. His medicine helper and wife, Reginah Water Spirit, co-authored The Bear is My Father, his second book. Bear Heart passed away on August 4, 2008, and was buried in his hometown of Okemah, Oklahoma.