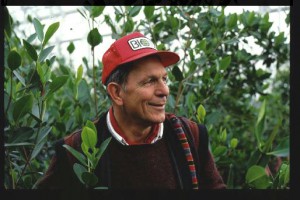 John also, together with colleagues, designed and built an ocean going research vessel, the R/V Heraclitus, to sail and study the world’s oceans. Built in 1975, the ship has sailed over 250,000 nautical miles, including up the Amazon and to Antarctica. The ship is currently in Southeast Asia continuing its adventures. See www.rvheraclitus.org for more information.

A Fellow of the Linnean Society, Allen holds a degree in Metallurgical-Mining Engineering with honors from the Colorado School of Mines, an MBA from the Harvard Business School where he graduated with high distinction as a Baker Scholar, and an Engineering Physiology Certificate from the University of Michigan. Before engineering, he studied anthropology, classics, writing, and history at Northwestern, Stanford, and Oklahoma universities and served in the U.S. Army’s Engineering Corps.

In the early sixties, John Allen worked on regional development projects with David Lillienthal’s Development Resources Corporation in the U.S., Iran, and Ivory Coast where he became an expert in complex regional development. Before that he headed a special metals team at Allegheny-Ludium Steel Corporation which developed over thirty alloys to product status. He has led expeditions studying ecology, particularly the ecology of early civilizations: Nigeria, Iraq, Iran, Afghanistan, Uzbekistan, Tibet, Turkey, India, and the Altiplano.

As a scientist, John is an accomplished speaker. He has spoken at a variety of international forums on the emerging science of biospherics, the implications of Biosphere 2 for health, environment, science, and culture, and the key role of space biospheres creating data necessary to understand Earth’s biosphere, and the place and role of humanity in earth’s biosphere as a cooperative agent that must create an intelligent harmony between ecology and technics.

Allen has over two dozen publications to his credit, about half of them scientific, the rest in poetry, drama, prose, and film.

A scientist, poet, playwright, and savant, he put on hold his New York international project development career in 1963 to make a two and a half year journey around the planet to study different cultural approaches to living with their ecosystems. He lived with the avant-garde and Berbers in Tangiers, Morocco;  then, clad in a jelaba across N. Africa, living with tribal chiefs and shamans while journeying on south on the Nile through the Sudan, continuing east to India, Nepal, Vietnam, and Japan, all the while studying the art, science, and literature of civilizations on this planet. He emerged as a writer from the Tangier school at age thirty-four. Since then he has chronicled a personal and social history of the essence of the places he has been through poetry, short stories and plays.

Under his nom de plume, Johnny Dolphin, he has read his poetry and prose (which both emphasize humanity’s connection with and responsibility for innovative co-evolutionary design with the biosphere), in many places around the world including George Whitman’s Shakespeare & Co. in Paris, the Green Street Cafe in New York where Ornette Coleman accompanied him on the saxophone, The October Gallery in London, and the Caravan of Dreams in Fort Worth, Texas. His plays have been performed in many countries on seven continents, from the ICA in London and Theatre du Soleil in Paris, to villages on the Amazon and streets in California, from Wroclaw to Oshogbo. As an acting teacher, he has taught over 200 actors and set up ten studios.

More Info: Me and the Biospheres